Your Tuesday Moment of Words Fail Me: Special Beat the Devil Edition

From who the fuck knows when, although possibly 2017, please enjoy (yeah, right) The Jay Skekulow Band and...jeebus fuck, I can't go on. It's a Boston song, and it's not Boston's fault. 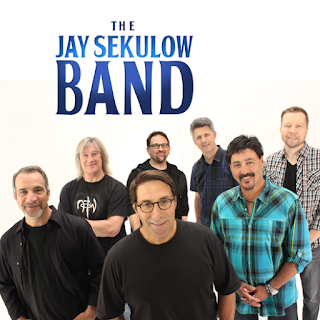 The Jay Sekulow band was founded by Jay Sekulow, Chief Counsel at the American Center for Law and Justice and includes an all-star cast: John Elefante former lead singer of Kansas, John Schlitt of Petra, Mark Townsend of DC Talk, Dr. Steve Guthrie, Marco Pangallo, and Scott Kirkman. Together they play songs that often resonate with the work and mission of the ACLJ. All these men above are Messianic-Christians and Pro-Israel-Yisrael / Pro-Zionism / Pro-USA!!

I really don't know how to say this, er, politely, but everybody in this band who isn't that fascist shitheel Jay Sekulow -- an evil sonofabitch who made his TV bones shilling for Pat Robertson on The 700 Club -- deserves to rot in hell along with him.
Posted by steve simels at 9:01 AM

Made it through about 4 minutes. The band "leader" didn't do much but play the bongos and look like the Bush Boy playing an acoustic around the time of Katrina.

I'm sure Tom Scholtz approves. And Brad Delp is rolling in his grave.

I'm sitting on the fence. Your post seems like both a warning not to listen to it, and a dare to risk head injury by listening to it. So far I'm playing it safe. Bands that look like that can't possibly.

Chris Wallace finally channeled his Dad (Mike) with his Sekulow interview.
I watch them all on Sundays, Meet The Press, Face The Nation...
YouTube that interview it is journalism at its best.

It was pretty much a note-for-note cover and done competently. Apparently the guy plays drums as well and has enough money to put together a solid classic rock cover band with decent production values on the recordings of other classic rock songs on the channel -- just for the hell of it. Maybe there's not as much "love" in the videos as there is for that Polish (I'm blanking) Chicago cover band, but...

These are not the songs I would choose to play in my own cover band (though I'd love to work with vocalists that could cover some of that material), but if only we were all so lucky to be able to afford to have that much fun in our 50s on...

Shriner-- I know what you mean. They could be, politics aside, a lot worse.

You win.
It's been a long time since I heard that one.
I confess I was never a Boston fan.
I watched carefully the whole thing, replaying several parts in an effor to see if Jay was even plugged in. It would appear that he dosn't play in this band. At least not audibly. He's not really playing congas, and he looks like he's having the least fun, because he knows he doesn't really belong.

Not saying you have to look at other videos BBJ (there's only so much time in the world to devote to youtube videos of cover bands) -- but he is behind the kit or playing guitar on other songs.

I think nothing illustrates the decline of our culture in our lifetimes better than the fact that the rock bands we grew up with and talk about here all came from out of nowhere. This guy grabbed our attention for no reason other than he's a rich asshole.

Shriner
Thanks for making me curious enough to check out another hideous classic rock song I wouldn't know. He is indeed behind the drums and Keith Moon he ain't. He doesn't do anything but barely keep time. The Toms were in no danger of being hit. Pay to play all the way.

Competent, but sterile, like the original. And pointless. Except that it's fun for the participating geezers. And I'm all for that.

BTW, foaming at the mouth doesn't become you:-) Man, do you need a really, really good fuckin'.

You rock it Vikey Rock because you rock.

Maybe some of you who have been in or around bands can identify with this little anecdote.

In the 1970's the band I was in lost our practice location. There was this young guitarist, who looked like Tommy Shaw, that followed us around and kept bugging us to let him audition for our band. That was completely out of the question as he was a real shitty player - a beginner, and not a very promising one.

However, his crappy 3-piece had the ultimate location for rehearsals. It was out in the country on a 100 acre ranch. Though we had no intention of letting him get on stage with us, we arranged an audition. This took place at his rehearsal space. We moved all of our gear there for said audition. It didn't leave for two years. The owner of the ranch, who was great looking and in his twenties, dug us. I really enjoyed subtly flirting with him in front of his pregnant wife. He kept starin' at my tits and lips. Typical dude.

Within a week, that huge tractor garage was exclusively ours. The owner booted the other guys out. He explained that they were beyond awful and the only reason they got in was because they were friends of his niece. So, yeah, we used the "Tommy Shaw" guy. But he had to be delusional to think he was skilled enough to be in our band.

Anyway, why is it called the Jay Sekulow Band when it seems he contributes the least? The rest of the guys are seasoned rockers, why defer to him? Don't know. Maybe he's being used in a similar way. Perhaps he's got the bankroll.

Had some time to listen to a few other vids of the band. Apparently they also have a couple of originals. Politics, tastes and hatred aside, one of them is a pretty well constructed pop song. Check it out:

Anyway, it was a 12-0 slaughter with Seager getting three home runs in one game. Lotsa fun. Though I did have to restrain myself from using karate on a petite and attractive Asian girl. She was a Met fan who was probably in her late twenties. She purposely elbowed a seven year old girl in the face, repeatedly squirted beer out of her mouth all over the people in the seats near her, she didn't have a ticket that matched the seat she was in, picked a fight with a vendor, loudly called Dodger fans "faggots" "ballsuckers" "shitlickers" etc. It wasn't really something one would expect from an attractive, petite Asian girl. I mean, you know, the stereotype would be more along the lines of demure, right?

Eventually it took four security dudes to carry her kicking and screaming out of the place before the fifth inning was over. Memorable. Awful, but funny. I shot videos of her on my phone and they really captured her essence. Man, did she need a really, really, really good fuckin'.

Dunno. Really just another cover band. Not a bad thing. Personally I love a great cover if it expands in some way on the original.

I also have to say the if I ignored/ decided to get pissed off at every band i disagreed in some way with, I wouldn't listen to much music.

As the say, YMMV.

Because she is Asian?

A subtle yet disgusting detail is that The font used for "The Jay Sekulow Band" is awfully similar the the one on Ringo's old bass drum. As if.