Music By People I Actually Know Personally (An Occasional Series)

From some time in the late 80s, please enjoy H20 -- featuring friend of PowerPop Tommy Stewart wildly overplaying on bass (because that's what he does) -- and their fiendishly catchy "Still the Morn." 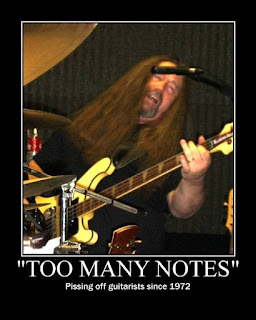 Tommy fills in the details:

The band H2O was Jimmy Hamiter on lead vocals and keys (minimoog and polymoog), Larry Jones on guitar and backing vocals, Dave Jutras on drums, and myself on bass and Taurus pedals. The song "Still The Morn" was written by the previous version of H2O (different guitarist, two female vocalists, and two keyboardists), and when the band reformed after a few months, it remained a four-piece. 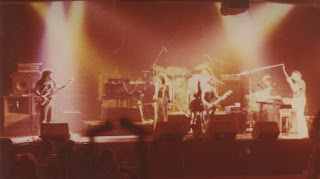 Apart from being a great guy and a great musician, Tommy used to read my poor scribblings at The Magazine Formerly Known as Stereo Review, so obviously he's way cool. He also keeps tab on the rightwing lunacy at the odious Free Republic website on a weekly basis over at FIRST DRAFT.
Posted by steve simels at 9:39 AM

Oh, he's THAT Tommy. I love his First Draft columns.

Sorry, I know he's your friend and all, but what is this third-rate Styx shit?

Hi, Gummo! Thanks for reading!
And "anonymous" (if that IS your real name), go piss up a rope.

Only if you suck on the wet end while Billy Sheehan makes you squeal like a pig :) Go back to your blog where you bag on moronic commenters from another blog, which you read every day, even though you can't stand it. Think about it. That's kinda sick. Get laid. Join the fuckin' Peace Corps. Go whitewater canoeing. Do something else. And I say this with love and best wishes for a healthy future.

seriously, kinda wondering after that silly diatribe why i have had far less offensive comments deleted from this website.