Got this from friend of PowerPop (and a guy who distributes Floor Models CDs, so he has excellent taste) Ray Gianchetti, proprietor of Kool Kat Musik:

Goodbye Kayfabe, the third (and latest) album from British multi-instrumentalist and producer Nick Frater sees a tougher sound, kicking off with sensational power-pop smash “Built To Last”! Featuring guest vocals from Nicolai Prowse (Do Me Bad Things) the song is a joyful blast of Raspberries meets Cheap Trick! "...impressive opener ‘Built To Last’ is one of the best retro-Raspberries singles I’ve heard this year. It’s almost impossible to top!" -- Powerpopaholic.com

Met with rapturous reviews when digitally released in early 2018, Kool Kat Musik has included three bonus tracks, including “Sara," which brings a hint of yacht-rock to the song’s narrative about witnessing a misguided workplace romance! Final track “The Sombrero Fallout Suite” is a truly staggering musical achievement! It’s an eighteen minute power-pop song-cycle, in nine movements! Imagine if The Flaming Lips had produced side two of Abbey Road 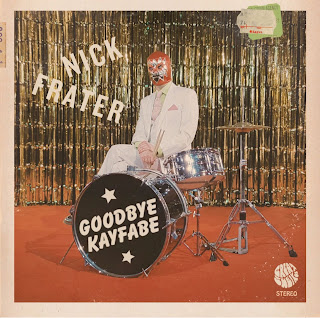 As you can hear from the above, Ray isn't indulging in hyperbole about "Built to Last," and I am here to tell you that his description of the rest of the album is spot on; this is modern pop with power at it's most inspired (although I must confess I haven't quite figured out the reference to yacht-rock).

In any case, you can (and definitely should) order it from the Kool Kat link up top; you can also find out more about Nick's other albums, including Something/Nothing (yes, it's a tribute to Todd Rundgren) over HERE.

Ordered. I hope it gets here by Thursday.

I took advantage of Kool Kat’s deal and ordered all 3 of Frater’s discs. Great stuff and money well spent.

"Yacht-rock" refers to late 7os-early 80s soft-rock, mostly out of L.A., personified by Christopher Cross, Kenny Loggins, Michael McDonald and McDonald-era Doobie Bros., AJA/GAUCHO-era Steely Dan, Pablo Cruise, Boz Scaggs, even Hall & Oates. The phrase got more prominence via the mock-u-mentary series Yacht Rock; you can, and probably should, dial up episodes on YouTube. Last year, the NUMERO GROUP put out a compilation (on CD and LP) of more obscure but worthy practitioners of the style.

Thanks for listening...and for sharing!
Not sure if you've seen it, but I made some fun videos to accompany Goodbye Kayfabe.

This is the one for Built To Last
https://youtu.be/BnQq2c-C5nY

And this is the one for Sara (the one with a Yacht-Rock groove)
https://www.youtube.com/watch?v=lki5bQws8dM

There's loads more of my music in production, so come say hello over on FB @NickFraterMusic