From some time in the '80s, please enjoy the incomparable Rudolf's Nightmare and their hilarious and increasingly speed-punk version of "Silent Night." 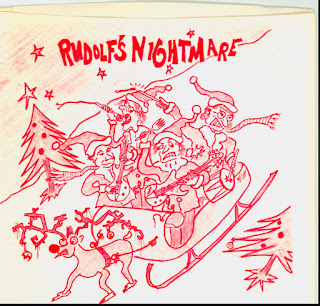 That indie 45 rpm slab of vinyl was the brainchild of a sometime bandmate of mine from the old days named Lars Hanson, who both produced it and played the way cool guitar stuff. Glen Robert Allen, drummer for The Floor Models and my musical director for the last 50 years, is the dude pounding the pagan skins.

If memory serves, Dr. Demento actually aired that a couple of times on his show. And if he didn't, he should have.