Attentive readers may recall that last year I waxed enthusiastic about the debut album by the charmingly monikered indie band The John Sally Ride, featuring friend of PowerPop (and proprietor of the invaluable Burning Wood blog Sal Nunziato on drums.

Here's what I said about the CD at the time.

The whole album is pretty much the most delightful surprise I've had so far this year.


And now comes their sophomore effort Nothing Doing... 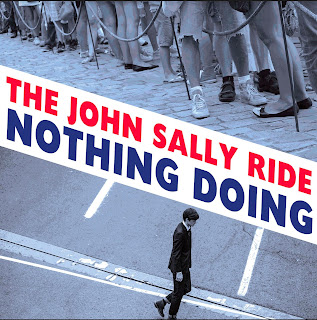 ...and in many ways it's an even better pop-rock confection -- more assured, sonically sleeker, and just terrific on every level.

And if you doubt me, dig this video for one of the best tracks on the record.

There's a digital version of the album up at Amazon, and if it isn't at Bandcamp, Spotify, et al, right now, it will be momentarily. In any case, get over to Amazon and stream it or download it toot sweet.

Sal also informs me that there will be a vinyl release sooner rather than later, and possibly a CD, but in the meantime -- what are you waiting for?

Oh, and have I mentioned -- Happy New Year everybody! This blog is a labor of love, and obviously I love you all more than food!!!

Thanks so much for the kind words, Steve. You made my day.

CDs are indeed available on Bandcamp!

As I was watching the video clip. I thought to myself two things, "Boy, someone's got deep pockets to make a film - not a video - that captures the song so well, AND why does this look vaguely familiar?"

The answers to both I got in the closing credits.

Great song, great tune, great sentiments. It should be played at every real wedding to regular folks getting married after 40.