Your Wednesday Moment of Clarke-Hicks-Nash

From the just released Teensville Records compilation WISHYOUAWISH: The Hollies' Compositions by Others 1965-1968... 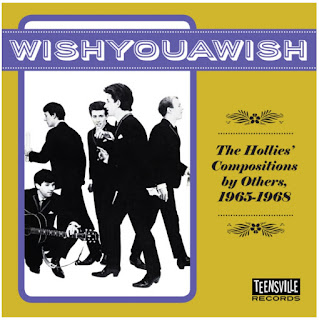 ...please enjoy The Searchers and their quite fetching cover of "Have You Ever Loved Somebody."

The original of that one is from the Hollies wonderful 1967 album Evolution, which is sort of their Revolver, but the Searchers cover dates from late 1966. I don't think it's as good as the version its composers did, but it was sprightly enough to go Top 50 in England. It got some airplay in America too, if memory serves, at least in the New York City area. In any case, a terrific song.

BTW, that new comp has some real doozies that I had never heard before; Amazon has it, but you can also order a copy from the fine folks at Teensville over HERE.

I have to admit I did not realize Clarke, Hicks & Nash were as a prolific as writers as they actually were - that TEENSVILLE cd has 30 tracks. I love the Hollies but I think of them largely as great interpreters.

Any cuts from the Everlys Two Yanks in England included?