It's About Time. Now Lets Get Them Into the One in Cleveland.

TRENTION, NJ -- Governor Phil Murphy has announced that The Smithereens will be inducted into the New Jersey Hall of Fame in the Performing Arts Category in the fall.

The Smithereens -- Jim Babjak, Dennis Diken, Mike Mesaros, and the late Scotch Plains native Pat DiNizio -- will be inducted at the 11th annual ceremony to be held on Sunday, October 27, 2019, at the Paramount Theatre in Asbury Park. The band had a string of hits in the 1980s, including Only a Memory, Blood and Roses, and A Girl Like You.

DiNizio, who was proud of his Scotch Plains roots, has been celebrated locally as an inductee into the Scotch Plains-Fanwood High School Hall of Fame. In 2018, shortly after his death, the Township honored him by naming a street after him. Mayor Al Smith and Township Manager Al Mirabella unveiled the sign marking Pat DiNizio Way at the intersection of Montague Avenue and Westfield Avenue in front of the musician's family home across from St. Bartholomew's Church. 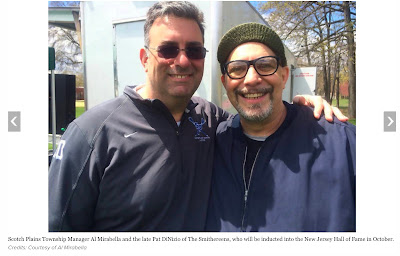 "This is terrific news for The Smithereens, Pat DiNizio, and his beloved hometown of Scotch Plains," Al Mirabella said. "Pat was a true personal friend of mine and I always enjoyed his stories and the way he shared his love of New Jersey."

"Wherever in the world he was performing, he always talked about New Jersey," Mirabella added. "I miss him, but I’m happy to know that he’ll be inducted into the NJ Hall of Fame. I’m sure his mother, Antoinette Dinizio will be very proud of this prestigious honor."

Apparently, Jon Bon Jovi is going to actually induct them. Fellow Jersey native (and one of my personal heroes) Southside Johnny Lyon will also be honored at the ceremony.

Sad that this didn't happen when DiNizio was still with us.

One of the best and most underrated bands of the 80s and 90s.

DiNizio had one of the best voices in the genre.

The Smithereens likely will never be in the RRHOF, but they will always be in mine!

Sadly, the Reens came on the scene after rock radio had been compromised by coke-addled consultants and their tightly-restricted playlists, and so never got the exposure - and the national fame - that they might have ten or twelve years earlier. I remember turning friends on to them (after reading Steve's review of Especially for You in Stereo Review!). Then, I dragged more folks out to see them at the Jersey Shore. None had ever heard of the band before. From skeptics to fans in one easy lesson - every time. The Reens were a great live act.

When I mention or play the Reens now, in my over-55 (shudder) community... it could be 1986 again. No one here ever heard of them before, but everyone who hears them thinks they're great. Ah well... what might have been. Thanks, Steve!

Great news and a step in the right direction. I suspect they were considered regional for too many of the masses... But many afr lesser bands have more accolades. RRHOF isn't my defining bar of success. But I hope the Smithereens can be recognized for more.