Better Late Than Never. Mea Culpa. Sorry for the Delay. I Could Go On, But You Get the Idea.

Attentive readers will recall my raving, recently, about a California band -- the charmingly monikered Picnic Tool -- and their song (and hilarious video) in praise of noted punk rocker Albert Einstein.

Since then, they were kind enough to send me their new EP, which happens to have my all-time favorite photo of Al on the cover... 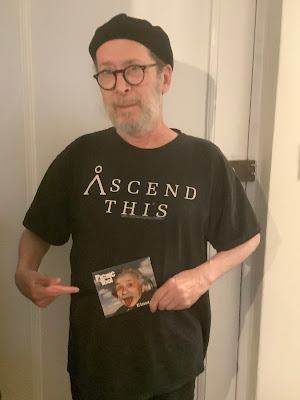 ...and I thought I would share the second video derived from it with you. Another very cool song, beautifully visualized.

And in case you missed it last time, here's "Einstein" again. Still completely cracks me up.

POSTSCRIPT: Also recently I had a very nice phone conversation with Picnic Tool auteur Bodie Plecas -- a charming and funny guy who had previously won my heart by allowing how he had read my old SR stuff, including the legendary review of the first Tonio K. album -- and he let it drop that he was also a filmmaker. Here's his very first effort in that regard, which he advised me not to judge too harshly.

Meanwhile, have I mentioned that you should get over to their website and buy something? Sheesh, do I have to do everything for you?
Posted by steve simels at 10:06 AM

Both tracks are great. The Einstein track has a Moe Berg-TPOH sound to it, great lyrics, and the video's brilliant, as is the guy doing Einstein. And if I heard Chinese Heart while driving in my car, I wouldn't even take the chance of some announcer (or machine) failing to back-announce its title. I'd make a mental note of the lyrics and check online for the title. After I parked my carcass, that is.

The film? Disturbing, yes. Nicely edited and I appreciated how Plecas told much of the story in close-up shots.

It was worth the wait, Steve. I liked "Einstein" very much, but was blown away by "Chinese Heart." Just ordered the EP. Thanks for this, Steve.