Well, if I ever needed an excuse for a cross-country trip, this is it. 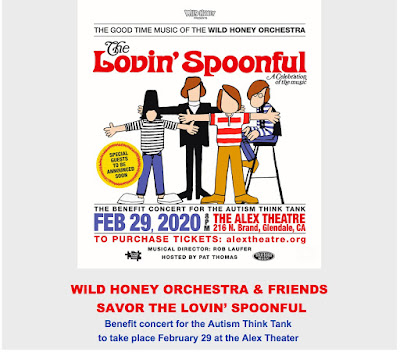 LOS ANGELES, Calif. — Benefit-concert producers the Wild Honey Foundation will present the music of the Rock ’n’ Roll Hall of Fame members the Lovin’ Spoonful as a fundraiser for the Autism Think Tank. The event will take place Saturday, February 29, 2020 at 8 p.m., at the historic Alex Theatre, 216 N. Brand Blvd., in downtown Glendale, Calif.

Led by acclaimed musical director Rob Laufer (whose credits include George Martin’s Hollywood Bowl tribute to Sgt. Pepper), Wild Honey Orchestra and Friends (guest singers TBA) will explore the groundbreaking catalog of one of the 1960s’ most influential if underrated bands in the folk-rock-country (Americana) world. In the tradition of Wild Honey’s benefit events (which have saluted the Kinks, Buffalo Springfield, the Band, Beach Boys ’67-’77, Big Star, and the Beatles, among others), the musicians will passionately celebrate every nuance of more than 30 of the Lovin’ Spoonful brilliant songs: “Do You Believe in Magic,” “Summer in the City,” “Six O’clock,” “Coconut Grove,” “You Didn't Have to Be So Nice,” “Darling Be Home Soon,” “She's Still a Mystery,” “Full Measure,” and so many more. Beloved by their peers — Paul McCartney, John Lennon, Ray and Dave Davies of the Kinks, and many others — the Spoonful created a rich and varied catalog of hits and hidden treasures that’s a perfect fit for the Wild Honey Orchestra and their merry band of guest performers.

As in previous years, the concert will benefit the Autism Think Tank, a non-profit that brings together a team of top autism specialists, via an Internet medical conference, to tackle the medical/psychological issues faced by kids like Wild Honey co-founder Paul Rock’s 15-year-old son Jake, a non-verbal autistic boy with extreme digestive distress and self-injury issues. Thanks to medical advice from a member of the Think Tank medical team, Jake’s often debilitating self-injury has been reduced by 95%. By giving families access to cutting-edge treatments, the Autism Think Tank provides welcome relief from the suffering that comes with severe autism. Since 2013, the Wild Honey Foundation has raised over $100,000 for the organization, which now operates under the wing of the newly formed Autism Healthcare Collaborative. Here’s a wonderful short video on how the Autism Think Tank works: https://youtu.be/cDszQ9BpKw8


I should add that tickets go on sale for this sure to be transplendent event this Friday at the theatre box office.

Incidentally, if you don't know from the Wild Honey Orchestra and musical director Rob Laufer -- who I wrote about most recently in August here -- here's a sample of their work.

That should say "Derick Anderson (The Andersons)." They did two excellent power pop albums around the turn of the century. The band included the underrated Robbie Rist.

Steve - I've been attending these concerts annually since they started by covering entire Beatle albums in order with some amazing guest artists every year. The live rendition of Revolution 9 was particularly amazing. One of the highlights every year - especially the 70's Beach Boys concert and the Buffalo Springfield show - has been whenever Susan Cowsill is singing. She is amazing and has a criminally underrated voice. I'm lucky to be living out West, so i'll be there!

No mention of Syd Straw's usual participation? That is musical journalistic negligence, lol! I love me some Syd Straw!