From 2020, please enjoy the pride of Bergen, Norway -- irrepressible monsters of metal Electric High -- and their fabulous new single "Harder to Justify."

In a video filmed at a recent live show by -- dig this -- their fans in the audience with their cell cameras.

Attentive readers may recall that a certain Shady Dame and I actually visited Bergen last year, and had a fabulous time. Including discovering Apollon Music, the oldest record store in the country.

A lot of Norwegian bands hang out there, including De Musikalske Dvergene and Frode Alnaes (who do killer Kinks covers in Norwegian), as we discovered during a conversation with our new friend Einar Englestad. 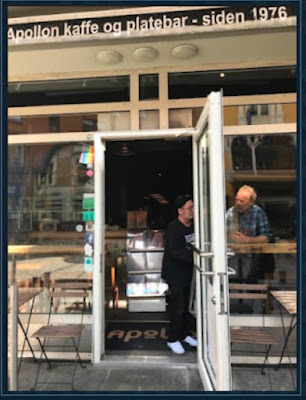 Einar works behind the counter at the store (which besides selling lots of vinyl and other collectibles is a very cool bar) and is a big shot music journalist in Bergen, doing concert reviews etc. at one of the local newspapers. He was also incredibly gracious to the loudmouth American poseur who wandered into his place of business that afternoon last August.

In any event, you can find out more about Electric High, including where to hear more of their music, over at their official website HERE.

And tell 'em PowerPop sent you.
Posted by steve simels at 8:14 AM

As one of your readers who just doesn't get out and about as much anymore (limited income, general decrepitude) I really enjoy tales of your travels. Don't be shy or modest, vicarious thrills are the only ones I get these days.
Tinpot

Our pleasure, pal. Glad you enjoy this gallivanting around.