The (Petrified) Dog Days of February

Okay, here's a little break from our usual PowerPop stuff.

THE DOG OF POMPEII
By Louis Untermeyer

Tito and his dog Bimbo lived (if you could call it living) under the wall where it joined the inner gate. They really didn’t live there; they just slept there. They lived anywhere. Pompeii was one of the most joyful of the old Latin towns, but although Tito was never an unhappy boy, he was not exactly a merry one. The streets were always lively with shining chariots and bright red trappings; the open-air theaters rocked with laughing crowds; sham battles and athletic sports were free for the asking in the great stadium. Once a year the Caesar visited the pleasure city andthe fireworks lasted for days; the sacrifices in the Forum were better than a show...

Read the rest of it HERE.

If it doesn't bring a tear to your eye, have yourself looked at.

I should add that Untermeyer was a good liberal Jewish guy who got blacklisted in the early 50s by the same fascist shitheads who now currently run our government. You can read all about him -- including the new to me story of how he got replaced by Bennett Cerf on What's My Line -- over HERE.

I should also add that when we were in Italy a few weeks ago, we saw an actual dog of Pompeii. 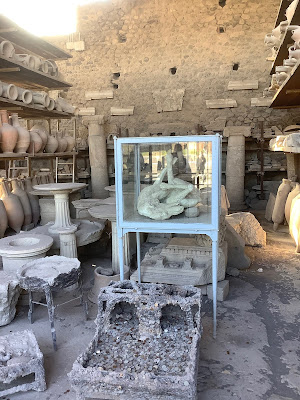 Which is what made me remember the story after all those years since I first read it.

Not the best idea to read that with your beloved golden retriever asleep at your feet.

Thank god it wasn’t THE PUSSYCAT OF POMPEII.