So I was over at Facebook yesterday gassing about my Tuesday post about the album ouevre of Brinsley Schwarz.

With my old chum rock critic Parke Puterbaugh. If you're not familiar with Parke, he wrote for The Magazine Formerly Known as Stereo Review for years; he also writes for Rolling Stone and he's a curator at the Rock and Roll Hall of Fame, which is to say he's a lot cooler guy than I ever dreamed of being.

But in any case, the following discussion ensued, which was joined by -- and I still can't believe this -- Brinsley Schwarz himself. 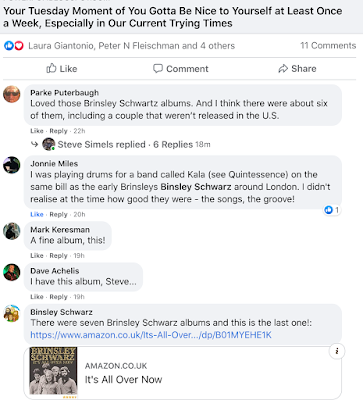 I don't know which I'm more flummoxed by -- the fact that I didn't know about that last album or the fact that the actual Brinsley Schwarz commented on something I wrote. And now excuse me -- I gotta go order that seventh Brinsley CD.

Which, as it turns out, is titled after their version of one of my favorite songs ever.

Today has turned out to be a very good day, oddly enough.

Saw Nick Lowe a couple years ago when Brinsley was playing with him. Before the show, Brinsley was at the merch table setting up his solo cd for sale so I wandered over, had a nice chat and bought a cd from him.

There are 5 albums in the boxset, and you listed "It's All Over Now" as the 7th. So to complete your collections, you need "The New Favourites of Brinsley Schwarz" (a little hard to track down these days - the Japanese version seems easiest)and then there is the live album, "Live Favourites" (and a whole bunch of different compilations not worth bothering with and the rarities "Hen's Teeth"- I don't have that one)

My eyesight isn't as good as it use to be but it looks like it say Binsley instead of Brinsley. What's up with that?

I worked so hard 40+ years ago tracking down the original albums- not easy to do when you live in Kansas and central Illinois. Directed bybthe same reviewer from SR. I had not see. This 7th album. The search will commence.

Makes me wonder what I'm missing for my Ducks Delux collection.

My above comments made from a general reaction of needing to complete the collect. I now have had a chance to listen to the attached and the rest of the album. Still a worthy addidtion. But....

I don't get the reggie musical turn. The misspelling is intentional. Bunch of white guy pub rockers partaking in too much mystical herb? Or the A&R guy desperate for a hit?

Bob's organ is a pure pleasure.

The rest of the album os quite the variety. Sappy pop to Power Pop. YMMV

Love the (original?) version of mess with love worthy of the price of admission.

While I'm blathering and reminiscing.... I miss cruising the cutout bins at record stores back in the day.....