Great Lost Albums of the Sixties (An Occasional Series): A Mere Bagatelle, Baby! 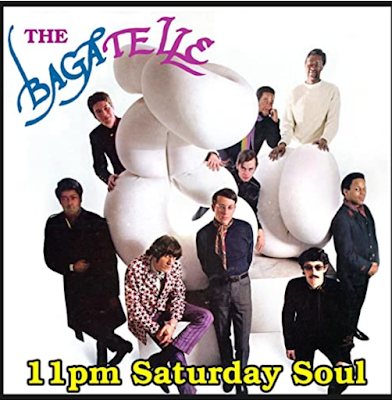 ...were from Boston, and the above was their sole album, released in 1968. Paul Williams from Crawdaddy, who wrote a blurb on the back of the LP, was an early booster, which is how I originally heard about them. I also saw them live in NYC -- I couldn't remember who they opened for, but a little research turned up the fact it was Procol Harum(!) and Moby Grape(!!) at a memorable Anderson Theater show that year. In any case, they blew me away, despite the tough competition, due to a canny combination of great musicianship, genuine charisma, and snazzy dressing.

The album itself -- which I didn't listen to until sometime in the aughts -- was an admixture of R&B covers of songs that are now standards but were at the time pretty much new, and the band's own flavorful originals. There were a lot of string arrangements and the songs were all sort of segued together, so it was a concept record; essentially it was an attempt, largely successful, to do a soul version of Sgt. Pepper.

In any case, because I love you all more than food, I'm enclosing a couple of representative tracks for your perusal.

Oh, incidentally -- the skinny white guy in the weird white and purple suit front center on the album cover is none other than Willie (Loco) Alexander, who later played in the next to last version of the Velvet Underground, and after that became a brief New Wave celebrity with his Boom Boom Band.

And if you ask me nicely, I'll burn you a CD of the album.