[Okay, kids, please indulge me while I get uncharacteristically serious. And I say this knowing full well that the name of this blog is PowerPop, not Pissed Off Old Leftist Hippie. But the fact is that yesterday I encountered a work of art that affected me profoundly in its terrifying prescience and relevance to our current historical moment, and I would be remiss if I didn't bring it to your attention.

The work of art in question is "September 1, 1939," a poem by W. H. Auden, which I had never previously read (it was posted this week over at the invaluable Hullabaloo blog courtesy of the great Digby), but from which I recognized several references; the line "the normal heart," for example, provided the title for Larry Kramer's great mid-80s play about the Reagan era AIDS pandemic, which suddenly doesn't seem as remote as it once did.

As you can gather, it's about the way the world felt at the time of the title -- Auden actually wrote it a year later, when things were even worse -- which is to say as the forces of global fascism were poised to take over the world. Obviously, anybody with half a brain who wasn't themselves a fascist felt the same as Auden did back then, but because he was an artist he articulated it better than most. As I said, I had never read it before, but because it seemed so familiar, it chilled me to the bone; all I kept thinking after I digested it was a paraphrase of another, earlier and better known, poem: "And what rough totalitarian beast, its hour come at last, slouches toward Bethlehem to be born."

In any event, I'm sharing it with you now for obvious reasons; this, as far as I'm concerned, is exactly how the United States of America and the world feels right this minute. Let's hope we survive, although frankly I'm not betting on it. -- S.S.] 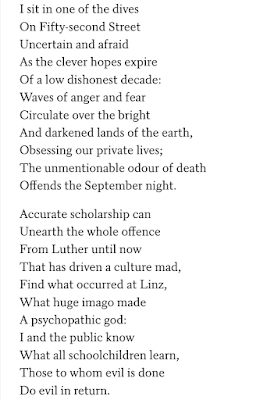 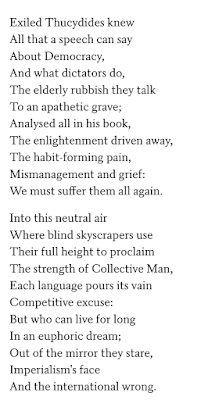 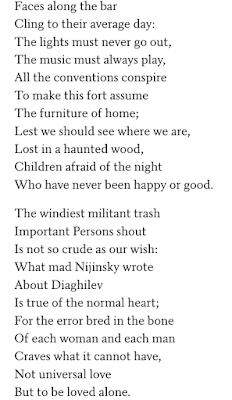 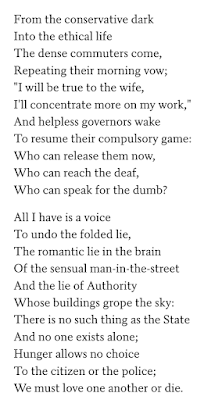 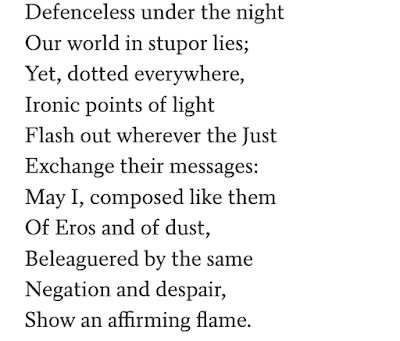 Have a great weekend, everybody. Heh.

Less poetic, more pointed, and considerably funnier is Bill Maher's look at where we are right now, and almost as bleak as Auden. From last Friday's show.
(https://www.youtube.com/watch?v=7cR4fXcsu9w)

I saw that. I haven't been a fan of Maher's for several years now, but he was right on the money with that.

"Blind skyscrapers" indeed. Thanks, very much, for posting.