Your Monday Moment of Food For Thought 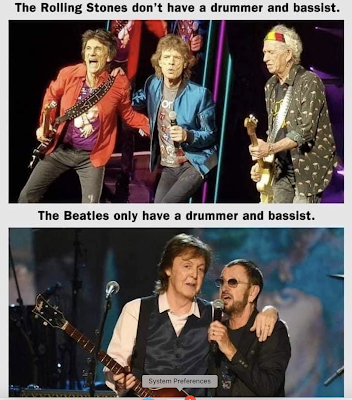 Just saying.
Posted by steve simels at 2:33 AM

McCartney recently referred to the Stones as a blues cover band. That's rather untoward...

Get off your cloud.

Strange days indeed...FY...Macca was referring to their start, and called the Beatle a Rock & Roll cover band. He was distinguishing their styles. Jagger took in well, and joked about it when they played LA and Macca was in the audience.

Both bands reached the " toppermost of the poppermost" ;-)

Now do Rush and Emerson, Lake and Palmer.

Daryl Jones: What am I, chopped liver?

It would be fun to see Mick and Ringo trade lines on "I Wanna Be Your Man", though!