Via my pal Glen "Bob" Allen, drummer extraordinaire, I am pleased to report that a genuinely significant and heretofore overlooked chapter in recent music history has been rescued from undeserved obscurity: Ronnie Spector's New Wave album Siren, which has never been available on CD, is at long last available for download.

Produced by veteran scenester/Woman in Rock pioneer Genya Ravan, the album was originally released in 1980 on Ravan's indie label Polish Records; to this day I don't know if that was supposed to be pronounced "Polish" as in the ethnicity or the stuff you use to shine shoes. In either case, Siren's a kick ass pop/rock record and the bridge between Spector's work with Little Steven and various Springsteen associates in the late 70s and her eventual return to the charts in the late 80s vamping Eddie Money on "Take Me Home Tonight." 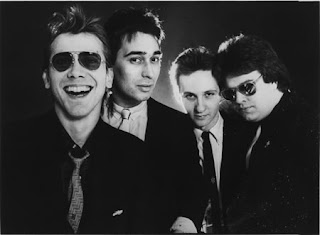 For those of you who weren't around Manhattan at the time, Diamond Dupree were highly regarded CBGBs stalwarts who should have been bigger, blah blah blah, but who now, with the return of the Spector album to availability, may get something of the due they deserve at last. [Full disclosure: I played bass with them in a much, much later incarnation; Glen, of course, has been my my musical director for the last forty years.]

In any case, you can download the Diamond Dupree tracks -- or the entire album, which behooves behearing -- from Amazon here.
Posted by steve simels at 12:01 AM

What a great photograph.

I vaguely recall having this on vinyl at some point.

Lest we forget - Wally & Howey (the dueling lunatics) and Mr. Rust Never Sleeps (Rafael Dupree himself).