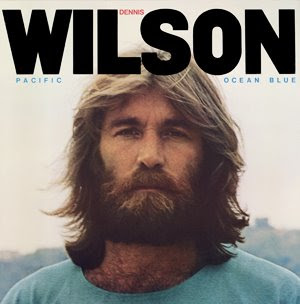 Better late than never and all that, I finally got around to listening to the reissue of Beach Boys drummer Dennis Wilson's semi-legendary 1977 solo album Pacific Ocean Blue the other day, and yes, it pretty much lives up to the hype. It may or may not be the masterpiece some have claimed, but there's no denying that it's a deeply affecting and sonically quite spectacular piece of work -- mournful, majestic, and soulful in ways that won't surprise anybody who took notice of the odd Dennis track scattered amidst the Beach Boys albums that preceeded it.

In any case, I highly recommend it, but in case you hadn't heard, the song that got the most attention, "Holy Man," wasn't on the original album; rather it was an unfinished track completed last year by, of all people, Foo Fighters drummer Taylor Hawkins.

Here's Hawkins with the story, which is actually rather moving in its own right, via last month's issue of MOJO:

My ex-girlfriend's dad is [original Pacific Ocean Blue co-producer] Gregg Jakobson. About seven or eight years ago, Gregg was saying "You know, you should check out this album I worked on with Dennis Wilson." And I fell in love with it; I loved the honesty in it, the aching beauty of his songs and his voice...

Gregg mentioned that there was a bunch of unfinished tracks. With "Holy Man," Dennis had done a vocal and hated it, and made the the engineer erase it. What they had was a scat guide vocal that Carl [Wilson] had done with a rough melody. Gregg gave me a CD of the song and said "Do what you think you can with it."

I didn't listen to it for a while. I just felt really weird about it -- like, I can't fuck with this...But I tried to channel how Dennis would have done it.

Some people may say "What the fuck is the guy from the Foo Fighters doing on this record?" People hold Dennis very dear to their hearts. But there's a lineage; I'm a beach kid, a drummer, and I've been living with Dennis's music for a long time. I meant what I did genuinely."

I think Dennis would have approved, actually; you can watch the official video of the song and listen to it here.
Posted by steve simels at 10:15 AM

I've actually got this on vinyl. Yeah, it's great. Dennis did some great stuff on those "forgotten" BB albums between "Smiley Smile" and "Surf's Up" - "Little Bird", "Be Still", "It's About Time". And of course that great "Pet Sounds" tribute on "Carl and the Passions," "Cuddle Up" - arranged by Darryl "The Captain" Dragon!

Oh, forgot another good one on "Holland" - "Steamboat"!

"Little Bird" is one of my all-time faves. On my iPod as we speak.

I avoided this record for many years. Besides what he did on various Beach Boys LPs, I couldn't past the clip of him doing an unctous version of "You are so Beautiful" on the "Beach Boys: An American Band" documentary. So, glad I bit the bullet and picked up this reish. It's wonderful!

I have been on the fence about buying this one. You guys have pushed me off. Thanks.

I had the pleasure of meeting Dennis Wilson several years ago at an Italian place in Krebs,Ok. Dennis was kind to a young kid from the middle of nowhere. I've always thought of Dennis as the ultimate Beach Boy. After the Boys show at our high school, as their limo was driving away, followed by a legion of screaming and crying high school girls, he threw out his drumsticks to the pursuing crowd. He was just that kind a guy.