In answer to a little throwaway question in the Weekend Listomania just passed, faithful reader TJWood got it right. The cover of a certain mid-60s Kinks album was indeed appropriated, and quite cleverly, for the cover of a CD by a certain mid-90s indie rock icon. 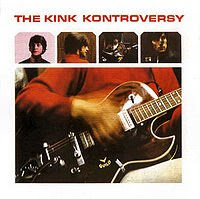 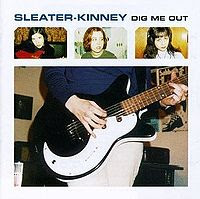 BTW, Sleater-Kinney are one of those bands I've filed under the general heading of "Lord Knows I've Tried." Critics, including "holy" Greil Marcus absolutely loved 'em, and they had a devoted and (by indie standards) huge following, but for me, they were just another one of those annoying groups without a bass player. I mean I know they were all about female empowerment and all that stuff, and people whose opinions I respect claim they were transcendent live, but they never made much sense to me.

Here's a video of them on Letterman...you tell me.

Oh well, I still think their Kinks cover pastiche is very cool. Which reminds me -- apart from The Clash's London Calling, which was lifted (not quite so specifically) from a 50s Elvis album, can anybody think of another example of something similar? It would seem like much too good of an idea for it to have been used only twice, but nothing's springing immediately to mind.
Posted by steve simels at 12:09 AM

I know what you mean about SK. I've tried too. And while they may be a great band (I think the video supports the claim - they rock hard!) it ain't powerpop. It's some sort of indie post-punk thing. It's just not my thing. Some good songs and melodies and I think I might fall in love with them. In a big way. But hey, I don't have to love everyone, and they don't have to change for me.

I like the S-K, but being in the northwest, I kinda have to.

For album covers, Weird Al parodied the famous Nirvana album cover and Petra Haden did her own version of The Who Sell Out for her own recording of that album. A little less similar is how Elvis Costello's Almost Blue cover uses the same lettering and a similar color scheme as Kenny Burrell's Midnight Blue.

There's gotta be more, though. I know the Knack's first album is supposed to be a lift from Meet The Beatles, but I don't think it's close enough.

We're Only In It For The Money - The Mothers Of Invention

Abbey Road has been done to death by folks too numerous to mention--including one we know.

Here's a thread with a bunch of similar album covers noted:
http://www.stevehoffman.tv/forums/showthread.php?t=49658

Thanks for that, I'll check it out.

I like Carrie Brownstein(?) when I hear here on All Songs Considered, but I never got into SK.

As for album pastiche tributes, few things as a music fan offended me more than when I saw this, which could get me banished from these parts for the mention of it.

There are also tons of rips from Blue Note LPs, the one that immediately comes to mind is Joe Jackson's "Body and Soul" and "Sonny Rollins, Volume 2."

I had heard of SK, and now I have listened to SK, but they do nothing for me.

The Residents first album, "Meet the Residents," was a copy of the "Meet the Beatles" cover but doodled over in black ink.

I think they had to issue a replacement cover at some point when there was a threat of legal action.

But the CD has it back.

The Residents first album, "Meet the Residents," was a copy of the "Meet the Beatles" cover but doodled over in black ink.

I think they had to issue a replacement cover at some point when there was a threat of legal action.

But the CD has it back.

Was it the Lyres who had a cover that was a direct steal of the "Some Girls" sleeve?

Funny - I own both the Sleater-Kinney and The Kinks album (on vinyl no less) but never noticed the resemblance.

Another NW Cascadian here. I do not consider myself a fan of S-K, yet I find their final album "The Woods" to be one of the best rock albums of the last 20 years. And Janet Weiss is a demon on drums. Check out her work with lo-fi power pop band Quasi for further proof.

Steve,
Try You're No Rock and Roll Fun. I think you'll like that one.

But in general, yeah. Found The Woods unlistenable.

Sleater Kinney might be half decent if the two women singing could actually sing in key. Man that Letterman performance was painful to listen to.

Late to the conversation as always, but...
SK recorded some excellent music, some less, er, accessible; the Letterman clip is a case in point. But try "The Professional" from 'All Hands on the Bad One'...IMHO a perfect pop song, fast & cranky.
http://tinyurl.com/bdqceo
(turn off the video, which is unconnected to the song).