Weekend Listomania (Special Are You Going to Eat That or What? Video Edition)

Well, it's Friday and you know what that means. Yes, my Oriental manual catharsis manipulation expert social secretary Fah Lo Suee and I are off to New York's fabled Upper West Side, where following traditional Sabbath observances (I just love the yellow bread the Hebes eat) we will be joining Jonah Goldberg and Debbie Schlussel (take THAT, Ashford and Simpson!) as first-nighters at the premier of the fabulous new one man show by Neo-Con scion and meeskeit William Kristol -- Thank You For Everything!

There may be significant quaffing of Kosher wines involved, but I'm sure I can handle it.

In any case, as a result, posting by moi will necessarily be somewhat fitful for a few days.

But until then, as always, here's a fun project for you all to contemplate:

BEST POST-ELVIS SONG OR ALBUM WHOSE TITLE OR LYRICS REFERENCES SOME SORT OF FOOD OR COMMESTIBLE!!!

Yeah, I know, I sort of did this list before, but this time I'm narrowing it down.

It has to be about something actually edible (or drinkable) in the context of actually eating (or drinking). In other words, "Brown Sugar," although a delightful spice, would not count here because the song is about something else altogether. As you well know. Ditto "The Lemon Song" and others too numerous to mention.

Okay, here's my totally top of my head Top Six:

"Where the hamburgers sizzle on the open grill night and day...."

From the abortive Smile project. I can't prove it, but I've always assumed this was in some way inspired by that classic Ernie Kovacs video (not, alas, on YouTube) where he uses celery to punctuate the cannon shots on "The 1812 Overture."

I have to admit, I still love the Hungry Man© turkey and mashed potatoes.

Road food for these guys, obviously. 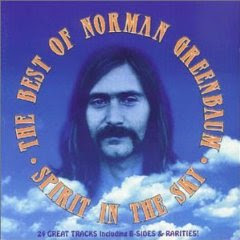 Video embedding disabled, but you can link to it here.

You really don't want to eat everything referenced in this song. Just saying.

And the number one song about stuffing your gullet with something, it's so obvious it's not even funny, is --

Because it's actually about drinking coffee. As opposed to their "Pulling Mussels From a Shell," which is not in fact about sea food.

Awrighty then -- what would your choices be?

[Shameless Blogwhore: My parallel Cinema Listomania (theme: best and worst films derived from TV) is now up over at Box Office. As always, if you could find your way to go over there and leave a comment, it would get me in good with management and be deeply appreciated by moi.]
Posted by steve simels at 12:07 AM

Martian Boogie - Brownsville Station ("Get you one of the greasy hamburgers all peppered up, lay you up in the hospital for ten days.")

Have A Cuppa Tea - The Kinks ("You get tea with your afternoon tea!")

A ginger sling with a pineapple heart -- Savory Truffle, by you know the rest.

And anyone for pie? “Call me for dinner, honey, I'll be there.” Country Pie, Dylan (what, you don’t think it’s just about pie?)

Time for only three totally random ones:

2. Jay & The Techniques (not to be confused with Jay & The Americans: "Apples, Peaches, Pumpkin Pie"

and staying with the fruit theme:

3. Pink Floyd: "Apples and Oranges", a b-side of one of the early Syd Barrett-era singles

I immediately went to the Allmans' Eat a Peach, but that was just a Georgia thing.

So, I've got John Hiatt's Just Like Your Dad Did:

I absolutely LURVE that Hiatt song.

My favorite thing on "Bring the Family," which is one of the all-time brilliant albums.

Taj Mahal - Ain't Nobody's Business: "You can drink all the liquor down in Costa Rica".

Pink Floyd - Another Brick in the Wall: "If you don't eat your meat, you can't have any pudding!".

And a little out of the era...

Cab Calloway - Everybody Eats When They Come to My House.

This is pretty hard.

Does "One More Cup of Coffee" by Mr. Z count?

And while it's probably not post-Elvis, I'd like to nominate "Saturday Night Fish Fry," which probably really isn't about seafood, either.

"Straight To Hell" - The Clash ("It ain't Coca Cola, it's rice...")
"Crawfish" - Elvis Presley
"The Scrapple Song" - Robbie Fulks
"Where Are The Prawns?" - Robyn Hitchcock
"Goober's Peas" - Civil War song
And the immortal "Esther is My Domino's Pizza Girl" by my old VT friends The Cuts.
- bill buckner

Much like the Smashing Pumkins, I think I can shoehorn the Stones into all of these. This Friday's entry
"You Can't Always Get What You Want" - The Rolling Stones ("I saw her today at a reception
A glass of wine in her hand')
AND
("We decided that we would have a soda
My favorite flavor, cherry red")

So far, all I can think of are songs about drinking, not eating:

Bruce's Glory Days: "went back inside, had a few drinks" ...

Grateful Dead's Brown Eyed Women and Red Grenadine: "The bottle was dusty but the liquor was clean"

Stones' Honky Tonk Women: "I met a gin soaked, bar-room queen in Memphis,
She tried to take me upstairs for a ride.
She had to heave me right across her shoulder
'Cause I just can't seem to drink you off my mind."

Well, here we are at St. Alfonso's Pancake Breakfast, where I stole the margereen.

I wish I was in Tijuana
Eating barbequed iguana

Dare I mention Dave Barry's choice for Worst Song Ever Recorded, with some of the most famous lyrics of all time? I mean, of course ... MacArthur Park!!!!!

From "Ease Your Feet In The Sea" by Belle & Sebastian

Soberly, without regret
I make another sandwich
And I fill my face...

Hate to use it somewhat sarcastically here because that is one great effin' song and performance on Out in California.

And, thanks for confirming my ear for me, Steve ... John Hiatt is truly great and Bring the Family is an incredible album.

Hate to use it somewhat sarcastically here because that is one great effin' song and performance on Out in California.

And, thanks for confirming my ear for me, Steve ... John Hiatt is truly great and Bring the Family is an incredible album.

A couple of semi-obscure ones:

Richard Thompson, Pearly Jim from The Old Kit Bag - "We need ketchup on our bangers and mash"

The Who, Going Mobile from Who's Next - "Play the tape machine, make the toast and tea when I'm mobile"

PS: nobody can post to your Box Office blog because when you try, you get this error:

Please be sure to fill in both the name and text comment fields to leave a comment. "

It's stretching it a little bit but the first thing I thought of was Lou Reed - What's good.

This game is like an ear worm. Once I check in, I can't stop thinking about it. A couple more at the risk of offending the guy who hates last century songs.

NRBQ - RC Cola and a Moon Pie. The whole song is about food.

And I suppose Margaritaville is too obvious, (or too embarrassing) to even mention.

One bourbon, one scotch, one beer.

Goober and the Peas (the awesome band from Detroit Municipal Records)

replacements- customer
(do you sell watermelons? ... uh, where're the twinkies?)

It’s an old song but to this day Diana Krall still wants the Frim Fram Sauce  with the ausen fey (and chifafa on the side). And who wouldn't want to rustle some up for her when she sings it like that?

' Well, I'll stop when I can,
Have some fried eggs & country ham,
I'll find somewhere, where they don't care, who I am."
Neil Young, "Albuquerque" (from "Tonight's The Night"


Who Am Us Anyway? said...
It’s an old song but to this day Diana Krall still wants the Frim Fram Sauce  with the ausen fey (and chifafa on the side). And who wouldn't want to rustle some up for her when she sings it like that?

If I were Elvis C, I'd write an autobiography called "Hey -- I'm Actually Sleeping With Diana Krall!!!"

He's a very lucky little twerp is what I'm saying...

Steve - posting is still broken over at Box Office; see my post above here for the error msg.


cthulhu said...
Steve - posting is still broken over at Box Office; see my post above here for the error msg.

I've been haranguing the IT guys over there with no success.

"Peanut Butter" is by the Marathons

Loved the Squeeze video...I still have that album!