Another irregular continuing feature here at PowerPop. Regular readers know that my pop mentor is the rock critic steve simels, who won my heart by recognizing a tres obscure 20/20 reference I once made in an Eschaton thread.

Simels and I have been trading music back and forth for a couple of years now, but rarely have I seen him as excited as he was about this artist, or as completely in the dark. I mean, it might be a good thing to have the music and nothing else, or not. But steve had only a few songs by this guy, about whom he couldn't say enough. I have to agree. 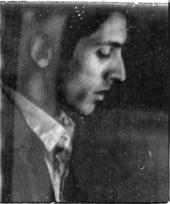 Steve was especially taken with this song, Do You Fly in Your Dreams?, which popped up on my ipod the other day, reminding me that I had been planning this post for a while.

When I went to track down his story a few months ago, there wasn't much to find. I was unduly tickled by the fact that he played George Harrison in Beatlemania (though not, I'll bet, in the travelling version I saw on my birthday in 1978 or 9), and I noted that he had a couple of records in the mid-90's (from which I'm pretty sure "Do You Fly" is taken, also the excellent "Reactionary Girl," memorably covered by Robin Zander on his 1993 solo record). Looks like he did a lot of commercial work, as well. In other words, he's a working musician who sometimes gets to do his own stuff.

So imagine my joy when I went to update the notes and links I had and discovered that he has a brand spanking new record out. Woohoo! We love that stuff here at PowerPop. Hear some tracks at his MySpace page (no nudity, Marie Osmond, don't worry), and it definitely sounds like He's Still Got It. Buy Laufer's new record, The Iron Age, here.

Congrats on the new record!

(As always, if the flagrant violation of copyright is a problem, contact me. I can easily take it down.)
Posted by NYMary at 10:23 AM