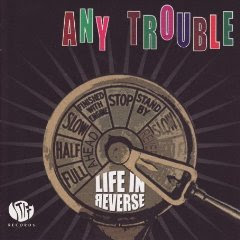 I may have mentioned this earlier, but for me, the big rock reunion of 2007 wasn't Led Zeppelin or The Police. For my money, it was the get-together of Any Trouble, the first generation Stiff Records band whose 1980 debut Where Are All the Nice Girls is one of the absolute gems of the era -- thirteen concise, gorgeously melodic guitar driven original pop gems with a punk edge and heart to spare, plus "Growin' Up," still my favorite Springsteen cover ever.

The reunion album (on the newly active Stiff, where it belongs) still hasn't been released in the states, so I finally took the plunge and ordered the import here. Turns out I shouldn't have waited -- it's an absolute gem on the level of the debut.

Seriously -- if that doesn't make you smile, you're trying way too hard to be difficult.

Incidentally, lead singer/songwriter Clive Gregson tells a wonderful story from back in the day. Seems Any Trouble were doing a gig with first generation power pop gods The Searchers, who were touring their wonderful eponyous Dave Edmunds produced comeback album. Gregson, who idolized them, went back to the Searchers dressing room, stuck his hand out and said "Hi, Clive Gregson, Any Trouble." To which Searchers guitarist/singer John McNally, barely looking up, responded "No thanks, everything's fine."
Posted by steve simels at 8:58 AM

Any Trouble could be compared with The Skeletons.