Tales From the Heartland

Now THIS is why you pay the big bucks to live in New York City. Oh, wait....

McCartney in Springfield? Strange As It Sounds, It Seems to Add Up
By Dave Bakke
Aug. 5, 2008

SPRINGFIELD — Name the last person you would have expected to see last weekend at the Circle K gas station on Clear Lake Avenue.

No, it wasn’t him. He’s at the White House packing for his trip to Asia. And, no, it wasn’t him either — he’s still in a cave somewhere on the Pakistan-Afghanistan border.

It was Paul McCartney. Or a really well-done hoax.

You probably find the story hard to believe. So did we. Especially when the witnesses claimed that Sir Paul was driving a 1989 Ford Bronco. But, you know what? It all adds up.

On Saturday afternoon, a group of Springfield guys stopped at the Circle K on their way to St. Louis for the Cardinals-Phillies game. While in the parking lot, they saw someone walk by who looked just like McCartney.

“We were getting in the car as he was walking in,” says C.J. Lowder. “I said, ‘Man, that looks like Paul McCartney.’”

The Bronco parked on the side of the gas station, not in the front. The man who looked like Sir Paul didn’t buy anything inside, but used the station, just off Interstate 55, for a “pit stop.” Nobody at the gas station even noticed him, Lowder said.

McCartney said he and his girlfriend, Nancy Shevell, were on their way to St. Louis, but not to the ballgame. He posed for a picture with the boys — besides Josh and C.J. Lowder, they included Jared Lowder (a cousin), plus Cory Neuhoff and Jeremy Judd. McCartney then spent a couple of minutes talking and left.

“He was definitely trying to stay low-key, for sure,” C.J. Lowder says. “It was just a couple of minutes. He shook all of our hands.”

“Another thing that got me,” says Josh Lowder, “was that of all the older people in the place, none of them recognized him. C.J. recognized him, and he’s the youngest one.”
Coincidentally, Decatur Celebration hosted a Paul McCartney tribute band on Saturday. Was this merely the impersonator? No. In an interview, the impersonator, Ron Starr (R. Starr?) admits he looks nothing like Paul and is much younger. Pictures of Ron Starr confirm the lack of resemblance.

But how about that 1989 (or thereabouts) Bronco? Paul McCartney? One of the richest men in show-business history? Come on.

But wait. It had New York license plates. Nancy Shevell lives in New York. The vehicle at the gas station had a yellow access sticker to the Hamptons on the bumper. Both McCartney and Shevell have places in the Hamptons.

And then there is the clincher.

In November, the Web site Gothamist posted a photograph of Paul and Nancy kissing while sitting in an older-model Ford Bronco. 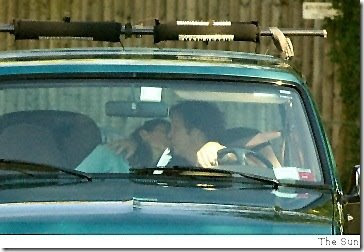 That is what people in the news business like to call “independent confirmation.”

“It was wild,” says C.J. Lowder about running into a Beatle at a Springfield gas station. “It was one of those things I never would have expected to see. They were super nice.

“Nobody got his autograph, it happened so fast. You could tell he didn’t want to draw a huge crowd. We talked for a while, and he said, ‘Well, I’ll let you get going to the game. Go Cardinals!’”

It’s not as if Sir Paul was playing a concert in Europe last weekend and couldn’t have been here.

McCartney’s Web site shows that his last concert was a week ago in Quebec City, and he is not on tour.

The Quebec City show was just a one-off for the city’s 400th birthday.

McCartney’s public relations manager in Britain, Stuart Bell, could not be reached Monday for confirmation of the star’s whereabouts.

At the Circle K station, manager Tim Kelley took the news of McCartney’s visit in stride. Kelley’s not the star-struck type.

But his clerk, Martie Brandon, flashed a little Beatlemania.

he was touring the legendary US Route 66. (whatever happened to george maharis and martin milner?)

Yeah, but I bet they didn't attract as much attention as these people did when they visited her parents somewhere out in the midwest. Yes, I confess, I actually watched a few episodes ... it was beyond surreal.

He was later spotted in Shelbyville buying a 6-pack of Duff.

As the book says...Everybody Poops...or pees, if the case requires.

McCartney drives a Bronco? Are all my dreams doomed to be crushed?

OTOH, nothing hotter than smoochin' in an old Ford.