"That summer, race was a much bigger story than the Beatles..."

Well, waddya know -- turns out that the Paul McCartney ditty that everybody loves to dis has some interesting unsuspected depth.

From the 40th Anniversary White Album Tribute in the September 2008 issue of MOJO:

Between starting the song in March in Rishikesh and the first attempt to record it in Abbey Road on July 3 fell what would have been Hitler's 79th birthday. That April 20, 1968, Conservative Shadow Defence Secretary Enoch Powell gave the notorious "Rivers of Blood" speech where he prophesied a racial apocalpse in Britain if immigration from the former Empire continued. It was headline news, provoking protests both pro and anti. That summer, race was a much bigger story than the Beatles.

So when Paul McCartney wrote what he intended to be a Number 1 hit whose male lead was clearly to be identified as West Indian ("Desmond is a very Caribbean name"), set to music that hybridised British music hall and a ska beat, how could he not be making a point? McCartney was in the business of making points in a publically palatable style: he'd written the Beatles previous single A-side, "Lady Madonna," in solidarity with women's daily struggle. The inspiration for "Ob-La-Di, Ob-La-Da came from a citizen of a former British colony typical of those in the Powellite firing line. Born Jimmy Anonmuogharan Scott Emutakpor in Nigeria, jazzman Jimmy Scott came to England in the '50s, for a while playing congas in Georgia Fame and the Blue Flames; he met McCartney in Soho's Bag O'Nails club. His Yoruba catch-phrase, 'ob-la-di, ob-la-da,' meaning 'life goes on', sparked a hit chorus just as Ringo's stray catch-phrase 'a hard day's night' had with Lennon four years before. And like that 1964 smash, McCartney's new song celebrated workaday romance -- but whose folksiness pictured a friendly face of Britan's controversial new arrivals in a familiar British street setting, the West Indian lilt giddying up a public bar knees-up.

The old joanna intro came courtesy of John Lennon whose "fresh attitude", according to Macca, "turned the whole song around" after it had become bogged down in repeated takes with Ringo and George that totalled 42 hours over seven days. 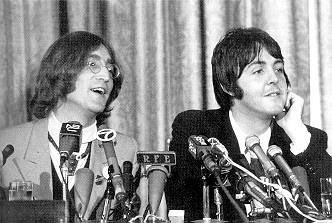 Vetoed as a single by the other three -- all that effort and ill-temper for "granny music" was their verdict -- the song went to Number 1 anyway as covered by Marmalade, a better version by Leeds-based West Indian musicians The Bedrocks having just scraped into the Top 20.

And Jimmy Scott? He played congas on an early take (Anthology 3), and McCartney later settled a legal bill for him in return for dropping a claim for royalties on the song. Later he joined UK ska revivalists Bad Manners, in 1986 contracting pneumonia on tour in the US and dying after being held for hours naked when strip-searched by immigration officials at Heathrow Airport. McCartney really had a point, it seemed. But not even his fellow Fabs got it. -- Mat Snow

Me neither, I must admit; that whole story is news to me, and mea culpa if everybody else has already heard it. To be honest, though, I've always liked the song, as unfashionable as it may have been to say in rock crit circles.
Posted by steve simels at 12:07 AM

Thanks for the post. Such a happy sing-along tune inspire by a man who met such a sad, ugly fate. When I hear it the buoyancy I've always felt in the past will be replaced by irony now. -- Sparkle Plenty
.

A song about "Desmond and Molly"? I always thought it was about Irish people and village life. Never knew anything about "Desmond" being some kind of code for Caribbean.

Interesting story indeed. I'm a Be-attles geek from way back and never heard that one. Sad indeed about Jimmy Scott, I guess fascistic tendencies of immigration workers is not as new as we'd like to think.

Thanks for digging this story up Steve, very powerful.

This was a very cool post... I assume with the anniversary you will be digging up some other tidbits? The ska/ carribean connection isn't that obvious. Other than Desmond Dekker I can't think of one other carribean person I have ever met with the name Desmond. Maybe it's British.

Wonderful post, steve, I too am a Beatles freak who never heard that story. Just because McCartney was less confrontational in his approach than Lennon, too many people assume he had no opinions and just wanted to please everyone. Not so.

There's a wonderful 20 minute segment of tape from a 1968 Mary Hopkins recording session where McCartney and Donovan are trading songs and stories on acoustic guitar. McCartney plays Blackbird and Donovan talks about what a wonderful way to characterize a "black bird", that is, a black woman. McCartney replies, I didn't mean it like that, but he sounds pleased with the interpretation nonetheless.

"the old joanna intro",,What does this mean? The song starts out with a piano Bflat bounce. I'm wondering what the heck ya mean. (I love the intro)

Yeah, what does "the old joanna intro" mean? And this Enoch Powell-Jimmy Scott subtext is news to me, very ebony ivory. Desmond was indeed a popular name in the British Caribbean, circa the Ian Fleming-in-Jamaica period. And thanks to Gummo, I now think of "Blackbird" as Macca's "Brown Sugar." -- Nora Charles

Immigration seems to have been one of Paul's pet issues. In addition to this, the Beatles also recorded (during the filming "Let it Be") and unreleased version of "Get Back" under the title "No Pakistanis," with altered lyrics that poked fun at those decrying the loss of good British jobs to the unwelcomed Pakistani immigrants.

Also, according to Wiki, the "old joanna" is simply Cockney slang for the piano

I heard that Lennon pounded the hell out of the piano at the beginning of the song in frustration because Macca was forcing them to do so many takes.

Thank you Steve and danny1959 for the info on the "old joanna" bounce.

Here are the versions mentioned in that Mojo article in case anyone wants to hear them: