Peellaert, of course, did memorable album covers for the Rolling Stones and David Bowie, but he made his biggest splash in 1974 with the brilliant Rock Dreams. Here's my review from The Magazine Formerly Known as Stereo Review in December of that year. In retrospect, that Dylan portrait below is my fave, by the way.

By now you're probably seen Rock Dreams, Guy Peellaert and Nik Cohn's brilliant pictorial fantasy-history of rock-and-roll (Popular Library, $7.95) and you know just how great it is; you know how uncannily true the fantasy situations in which Peelaert has painted the various rock figures ring, and I'm sure you've got you're favorites. I certainly do -- Diana Ross in the back seat of her limousine as she returns to the ghetto she denies ever having lived in; a short-haired Mick Jagger (the final seqment of the Stones sequence) dressed in a smoking jacket, alone in his room and looking for all the world like a pop Dorian Gray; Creedence Clearwater Revival's John Fogerty (and where is he now that we need him?) in a rowboat on his way through the Louisiana bayou he conjured up so wonderfully without ever having seen; and a bedraggled and broken Jerry Lee Lewis standing alone in the rain, crying in his beer. 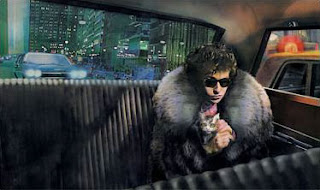 Obviously, a long-winded analysis of the book is unnecessary, even presumptuous; like rock itself, it is in many ways above analysis. But I do have two thoughts that I think are worth mentioning. First of all, some critics have noted that the only place the book's vision falters is in its portrayal of the latter-day heroes -- Bowie, Bolan, and Lou Reed -- who are treated simply as traditional portrait subjects, and have chalked this up to the fact that Peelaert, because of his age, is perhaps a little distanced from these contemporary myth figures. I suspect it's not quite that simple; it's especially instructive to compare his gorgeous representation of the Velvet Underground (with Lou Reed) to his rendering of Reed today, at the same time bearing in mind the music each represents. The former has the capacity to haunt the imagination, while the latter is simply there. Peeleart, it seems, is a much more perceptive rock critic than many of those who do it for a living.

Secondly, the book, great as it is, is in a way quite depressing. Like it or not, it's a retrospective, a summing up; I don't think it could have been done even five years ago, simply because the music and the musicians were much too vital. But in 1974, I find myself much more excited about the book Rock Dreams than about almost any recent rock album, and if that suggests to you what it does to me -- that rock-and-roll as we knew and loved it is indeed as decadent and played out as many have observed -- then it becomes an almost painful experience to finish it. To paraphrase Dave Marsh, I don't want to hang up my rock-and-roll shoes myself, but I'll be damned if I can give you a good reason why I shouldn't. Rock Dreams, for all its power, doesn't give me that reason, and I don't like that at all. But get it anyway.

Rock Dreams blew my young mind at the time. Many of the images are indelible: Roy Orbison weeping on his motorcycle, the dead Sam Cooke on the motel room floor, a cornered Gene Vincent slumped and clutching a switchblade, the nude Mama Cass and Michelle Phillips in lotus positions...great stuff.

Well Steve, Rock & Roll has mostly stayed vital despite itself. The sixties were a magic time for our generation and each succeeding generation felt the same way about their generation's music until now.

If my students of this present decade are any indication they just don't burn for music the way the fans of the past have for R & R and music in general. The kids could care less what music I play in my classroom most of the time, a huge change from the past when roaring arguments would rage over what tunes we were going to play that day in class.

After 50 years is the bloom starting to fade off the rose of Rock & Roll for the younger generation?

Wasn't it CREEM that printed a bunch of those paintings when the book came out (in glorious black and white, at that)? And just leafing through it now, I was struck by the great portrait of the post-Brian Beach Boys stranded on a rainy beach next to a broken-down old jalopy with "Greed" painted on the hood...