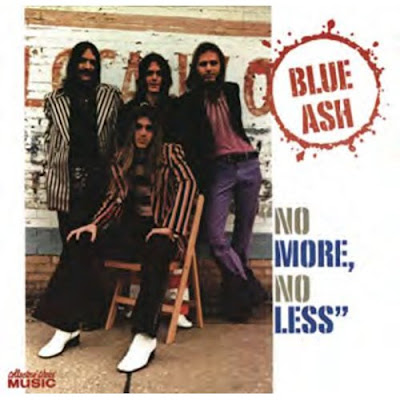 The good folks at Collector's Choice just released Blue Ash's classic 70s powerpop LP No More, No Less at the end of last month. From the promo material:

When England's esteemed 'Guardian' newspaper assembled their list of 1000 Albums to Hear Before You Die, the 1973 debut album from Blue Ash made the grade amongst all the established classics—pretty remarkable for an obscure record that was out-of-print for over 30 years! Well, we at 'Collectors’ Choice' have rectified that injustice, so this critically acclaimed LP can take its rightful place in the power pop pantheon. Signed to Mercury by legendary rock critic/publicist Paul Nelson, this four-piece from Youngstown, OH was among the first power pop bands alongside Badfinger, Big Star and Raspberries to revive the virtues of mid-’Sixties rock against the then prevailing tides of prog excess and singer-songwriter self-absorption. 'No More, No Less' showcases the band’s knack for melodic three-minute pop tunes delivered via a breathless attack that melded the Byrds’ jangle with the Who’s rhythm section and the Fab Four’s harmonies, as heard on the first cut and best-known track 'Abracadabra (Have You Seen Her?)'. Also includes their rave-up of the Dylan rarity 'Dusty Old Fairgrounds' and such proto-power pop gems as 'I Remember a Time' and 'All I Want'.This first-ever CD release features brand-new liner notes, courtesy of the band’s bassist and co-songwriter Frank Secich, along with rare photos from the band’s archives.

Records fans are probably familiar with the killer opening cut Abracadabra (Have You Seen Her?) that appeared on the bonus EP included with their debut U.S. release. I can vouch for the fact that this disc is a stone cold powerpop classic not only because the band hails from my hometown Youngstown, OH, but also because it is simply an exuberant blast of unpretentious Beatlesque rock and roll that cannot help to bring a smile to your face. It's a shame that it took over 30 years for this to get back in print, but here's your chance to pick up a giant of the genre.
Posted by Kid Charlemagne at 9:25 AM

Well, I'm going to Amazon for this posthaste.

Seriously, I can't believe it's taken so long for this one to be on CD.

Somewhere in heaven, I hope Paul Nelson (who was as genuinely a nice guy as anybody I've ever met professionally) is smiling about this.

Amazing album -- about goddamn time its out. Thanks for the heads up on this!!!!

This album has special meaning to my brother and me and we went absolutely batshit when we heard it was coming out. Simply put, this was our dream CD reissue and we clearly waited a long, long time for it to emerge.

We grew up in a small town in Pennsylvania -- Altoona -- and Blue Ash played there regularly back in '73. (If you have the "Around Again" comp on NotLame, a location in my hometown is even mentioned in the liner notes.) Blue Ash played at my brother's junior high and even at the public swimming pool across the street from our house. I kid you not. Imagine a perfect, early-'70s summer night and one of the great, undiscovered power pop bands of all time is playing live right in front of your house. It's one of my fondest memories of growing up there.

The best part is that, although we developed this emotional connection to the band through geography, it was the beauty of the music that cemented the deal. My brother and I feel the same way to this very day.

If you don't own this CD, your collection and your life are both incomplete. Order it now! Not in five minutes. NOW!

I saw your post and had to make a comment.It brought back so many memories. Blue Ash used to love playing Altoona. I'll bet we played there a hundred times at places like the Penn Alto Hotel Ballroom & Holidaysburg YMCA and lots of schools and dances. There was a local DJ named Tom Foolery who quite a character too that we used to love. I have a funny story relating to Blue Ash & Altoona. In 1972, our manager Geoff Jones was working for the McGovern campaign in Youngstown. he was working closely with the famous actor Tony Randall who was in town promoting McGovern. Tony asked Geoff what he did for a living and Geoff said "I manage a rock group called Blue Ash but you probably never heard of them". Randall replied " I know quite a lot about Blue Ash. I was working on the campaign in Altoona last week and that was all the girls on the campaign talked about...Blue Ash!" I always thought that was a funny story. Thanks again for the compliments and the post. We are back together and having a lot of fun the with "No More, No Less" reissue. We're even doing a few gigs soon. There's more on:
Http://www.myspace.com/officialblueash

I went to the myspace page and listened to the tracks. I like the last two the best.

Never heard of Blue Ash before today.
A lot of regional bands from the NW you probably never heard of either.

Old guys rock! by the way.