No Country For Old Men

And speaking of the Fab Four, I've been searching the web for this picture of the Fabs at 64 for some months now. My befuddled brain remembered it as having appeared perhaps in LIFE magazine back in the day, but my old pal Steve Schwartz, who's forgotten more about the Beatles than I've had hot meals and who forwarded it, reminds me it's from the 1969 book The Beatles: The Illustrated Lyrics. 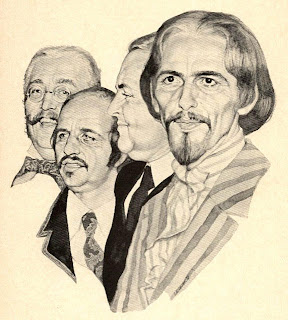 In any case, with hindsight, the artist got a few of the actual details wrong -- there are few things that fill me with more sadness than the fact there are only two living Beatles at the moment -- but as a fantasy it's simply lovely. Paul looks like the cheerful successful bourgeois burgher he probably really is, while John and Ringo are glorious old duffers who could have served with C. Aubrey Smith in some The British in India movie from the 30s. George, of course, looks like the dapper, slightly mysterious old hippy he was before the cancer took him.

For what it's worth, of course, George Orwell famously said that every man over 50 gets the face he deserves. By that standard, the actual living Paul and Ringo are doing pretty good, I think.
Posted by steve simels at 8:46 AM

Well, I lose the bet... I thought this would be a similar Bob Clarke illustration from MAD Magazine about the same time.

Wow, I remember that sketch! And it makes me sad, too.

I agree that Paul and Ringo look damn good for their age, but I do wish Ringo would take off his shades once in a while so I could see those beautiful, soulful eyes!

I remember that book! I would leaf through it when I went to the book store, trying to memorize the lyrics. Of oucrse I also remember tearing the brown paper bag cover on Two Virgins to get a peak inside. But that is TMI isn't it?

A good friend from my grad school days remarked that Ringo is the "George Burns of the Beatles." He'll just go on forever and never look a day over 60.

I am the walrus mustache.

I remember seeing a similar feature in MAD magazine in the mid- to late 70s. It showed the four separately - not in one picture, as in this drawing. All I can remember is that it showed one of them as being totally bald.