Over at The Magazine Formerly Known as Stereo Review, the editors have come up with yet another list of the Top 50 Albums of All Time. 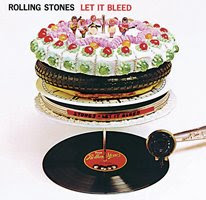 4: The Rolling Stones: Let It Bleed (London; ABKCO)
This isn’t just a farewell to a decade; a counterpart to Goodbye Baby & Amen (Stones cover photographer David Bailey’s book of portraits, published earlier the same year), it’s the sound of an era shutting down. The album opens with the aural equivalent of a pistol shot in the apocalyptic “Gimme Shelter.” And it ends with an ode to resignation, “You Can’t Always Get What You Want” — which is also, in Greil Marcus’s apt phrase, the most outrageous production ever staged by a rock & roll band. In between, there’s a lot of stuff that sounds like cowboys playing the blues, a lot more stuff about sex and death and power (the Stones’ great subjects), and best of all, Keith Richards’s first solo vocal, on the utterly gorgeous “You Got the Silver.” The band’s next two studio LPs were variations on the theme; if Let It Bleed was the last gasp of the ’60s party, Sticky Fingers and Exile on Main St. were the staggering home at sunrise and the subsequent hangover. — STEVE SIMELS

For the rest of the list, including several other equally pretentious capsule reviews by moi, feel free to go here.
Posted by steve simels at 10:27 AM

i vote for Laura Nyro
all of her albums

Pretentious??! I don't think so! The crisp, pithy writing throughout that 50-album trip is a rebuke to wordy guys like me. It's a great read.

In all truthiness, Steve...your reviews are the least pretentious of the lot.

Really Steve, I read that and was thinking "Straight up." Only after that did I get to your credit. You nail em pal, that is why we are all fans of your writing. Carry on dude, carry on.

if Let It Bleed was the last gasp of the ’60s party, Sticky Fingers and Exile on Main St. were the staggering home at sunrise and the subsequent hangover.

I dunno, I've been listening to "Beggar's Banquet" a LOT the past several months and it just might edge this one out, IMHO...