I'd like to say that the following story was reported by Father Guido Sarducci, but it's not, although it is in fact for real, as silly as it sounds. From yesterday's New York Times Arts & Leisure section:

So many records, so little time. But the Vatican can help. The official newspaper of the Holy See, L’Osservatore Romano, has published what it called a “semi-serious” guide to the Top 10 pop albums of all time. In first place was The Beatles’ Revolver. The next was If I Could Only Remember My Name, David Crosby's first solo album, followed by Pink Floyd's Dark Side of the Moon. The newspaper published its list on Saturday, before the start of the San Remo festival, an over-the-top Italian competition of pop music that is widely watched on television. The rest of the list: Rumors by Fleetwood Mac; The Nightfly by Donald Fagen of Steely Dan; Thriller by Michael Jackson; Paul Simon’s Graceland; Achtung Baby by U2; (What’s the Story) Morning Glory by Oasis; and Carlos Santana's Supernatural.

Okay, questions of papal infallibity aside, the above list is no better or worse than any other example of the genre I could think of, but there is one kind of ringer in there -- to wit, that 1972 Crosby solo album. Which I'm aware has a certain cult following, probably as a result of the woozy cannabis haze that hovers around it like an aromatic psychotropic shroud. But for my money (and I'm a Crosby fan) it's kind of a mess.

Case in point, the song that's usually considered the album's masterpiece -- "Laughing." Recorded with the help of just about every stoned hippie San Francisco musician at the time. 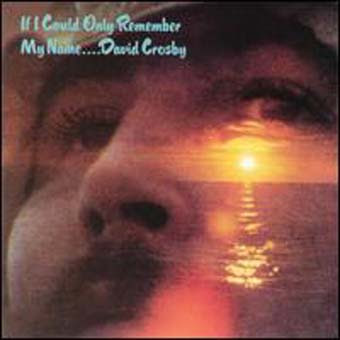 Consider by comparison this remake. I refer of course to the standout track (IMHO) from The Byrds' (with Crosby, obviously) otherwise patchy 1973 reunion LP. (Incidentally, Crosby says he wrote the tune for them in the first place.) I think you're hearing the difference between a zonked indulgence without dynamics or drama and a totally focused real band firing on all cylinders. But as I said, the solo album has its fans.

That they're in the Vatican, of course, kind of blows my mind.
Posted by steve simels at 12:02 AM

I read that one too. I was a little shocked to see the Crosby LP there. The Byrds version is slightly better. Although one must have to smoke a lot of strong ganja to listen to either. And with the inclusion of Floyd's Dark Side the Pope must really smoke dope! Strange article though, at least he likes The Beatles.

That first one has a groove so sluggish it could only be the Grateful Dead. Clarke has his problems with that long rest the first time around, but you're right. This is a real band.

Here's a Listomania topic: best Catholic rockers. You'd have your Bruce, your Patti, maybe even your Gerry Devine.

Frank:
I actually think the Byrds version is quite moving and magnificent, in case I didn't make the point. It's one of my favorite things of theirs ever.

I dig em both. Part of the mystique of Crosby's solo album is how WONDERFUL it sounds! It really was beautifully recorded with real dynamics instead of over reliance on the limiter.

I think the choir at the Cathedral Basilica of the Sacred Heart in Newark was doing the Crosby tune when I arrived forty minutes late for mass this past Sunday.

One of the sad things about the current British music press is that they think that IICORMN is a great album, and that younger bands who sound like that (aimlessness plus slow tempos and general tunelessness) are brilliant.

Yeah, IICORMN is a bit of a mess, but as already stated, it is wonderfully recorded. For years, the lp was on the reference recordings list of the Absolute Sound audiophile magazine. The DVD-A version of it has a really nice sound - my subwoofer gets a nice workout with it.

All in all, I find the Vatican list much more to my liking than most such lists. Not sure what that says about me. I probably should not tell them, I have an "unofficial" version of IICORMN, called "If I Could Only Remember These Tunes".