The Shorthand of Beauty

From punk poetess and mother of us all Patti Smith's Just Kids, a new memoir of her early days with artist Robert Mapplethorpe, as quoted by Tom Carson in his New York Times review last week:

Valhalla for them both was the back room at Max’s Kansas City, where Andy Warhol, Mapplethorpe’s idol, once held court. By the time they reached the sanctum, though, Warhol was in seclusion after his shooting by Valerie Solanas in 1968, leaving would-be courtiers and Factory hopefuls “auditioning for a phantom.” Smith also wasn’t as smitten as Mapple­thorpe with Warhol’s sensibility: “I hated the soup and felt little for the can,” she says flatly, leaving us not only chortling at her terseness but marveling at the distinction. 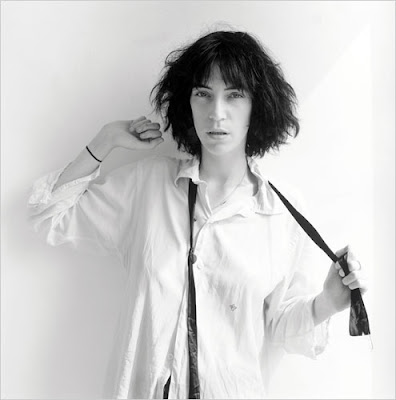 Smith, as Carson later notes (perceptively I think), "has always been both tough and funny, two real saving graces in an artist this prone to excess." I'm reminded of something she said when I asked her about Elvis Costello in an interview for the old Stereo Review back in 1978.

"I don't like Elvis Costello. I don't hate him, but...I mean, as a politician I'm into solidarity, but as a fan I'm relentless, a real Nazi. You ask the fan in me and you're gonna get a pretty narrow view. Basically, if there isn't somebody I want to fuck in a band, I couldn't care less. Unless it's such great abstract music it carries me away. Otherwise, if it's a rock-and-roll band, there better be somebody fuckable or forget it."

Have I mentioned I've been a fan of this woman since forever?
Posted by steve simels at 7:18 AM

I have always shared this philosophy. That's how you can tell it is rock and roll.

I had the distinct pleasure of seeing this woman and her band perform at "The Place", a bar in Eugene, Oregon. To call it memorable would be selling it short.

Thirty one years later, I see her at the Stockholm Jazz Festival. At her press conference, she was patient, polite and genial, expanding on some of the lamest questions I have ever witnessed (Why did you want to perform at a "jazz" festival?").

After the questions, she picks up a guitar and plays an acoustic version of "My Blakean Year" to thank us, the press, for coming. Very, very classy.

I remarked to her about that show in Eugene, and she spent about 10 minutes not just recounting the show being a good one (she remembered!), but how she spent the day picking out songs on "that neat, little FM station they had there."

Truly, an artist and, more importantly, a genuine person.

Some day remind me to tell the story about the album release party/concert for "Easter" at Max's Kansas City.

I have an ex-girlfriend who still hasn't gotten over it...
:-)

Finally I understand why I've always preferred the Stones to the Beatles!

Another great photo of a no bullshit broad.

I'd love to see Patti go on Elvis' talk show...

Sorry Steve, wasn't really that much into Patti. I sort of like 2-3 songs she ever did, at best. When I ran the record store (House Of Oldies) she would pop in from time to time with a mustache and smelling like she hadn't washed in a week. Not very talkative either, a real dud.

As far as her artistic value, maybe it's just me but I never got it. That's only my opinion, for example, I would rather have the Heart sisters Ann (when she was thinner) and Nancy in bed with me instead of Scarecrow Smith any day.

Well, then I won't post those 70s nude pictures of Patti that I found on the intertubes the other day.
:-)

Patti is the real deal. Except I cannot really get behind her fuck em if they're good mentality, I can agree that nobody in the attractions or imposters is fuckable IMHO.