Well, it's Friday and you know what that means. Yes, my Oriental erectile funfest consultant Fah Lo Suee and I will be off to the basement of the Washington Post, where along with Dean of the Washington Press Corps David Broder we'll be watching home movies of former Alaska governor Sarah Palin [R-Morals-Free Harriadan] writing excerpts from The Story of O on her right palm.

That being the case, further posting by moi will have to be sporadic for a day or two.

One arbitrary rule: Nobody who was a member of Crosby, Still, Nash and Young is eligible, with the exception of the sidemen. Also: Those who nominate folkie acts will be mercilessly mocked by me on a case by case basis. 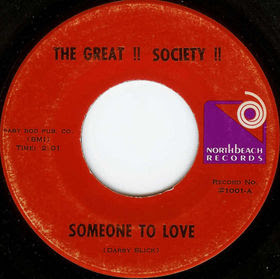 Every couple of years, I pull out Grace's pre-Airplane records and see if they sound any better to me than they did back in the day, but they never do. Seriously -- an A/B comparison of this and the Airplane hit does not, shall we say, do the Great Society's original any favors.

This is actually a very nice record, and the Sutherlands also made one absolutely classic single, "I Don't Want to Love You." But jeebus, what a bunch of dorks. Hard to believe that the geeky bass player on the left went on to be Mr. Cool as a member of Elvis Costello and the Attractions. 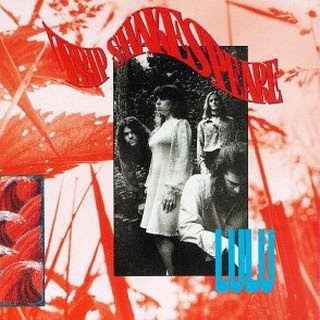 Wilson, of course, went on to the far more commercially successful Semisonic and the Grammy-winning hit annoyance "Closing Time." This earlier outfit was much better, I think, and the song above, "Bachelorette," from their 1991 Lulu album, is a long time fave. A monster groove, and my gosh -- the drummer was a girl!!!! 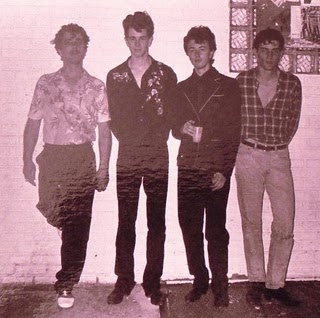 Listening to this crap in retrospect, it's obvious that Setzer was a cool guitarist even before the Stray Cats. But this lot was hands down the dullest of the 80s post-punk downtown NYC art-rock bands. Lousy name, too. 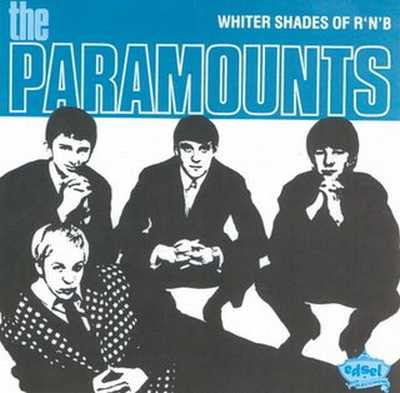 The Paramounts were apparently a great live club act -- The Rolling Stones publically proclaimed them their favorite r&b band on a least one occasion -- but their records, including the above cover of Allen Toussaint's classic "A Certain Girl," don't quite seem to capture whatever it was they had onstage. In any case, a couple of years after this stuff was recorded, three of them found deserved fame and fortune as part of the classic lineup of Procol Harum.

And the numero uno pre-celebrity band featuring somebody who is much better known for a much bigger group is, quite obviously... 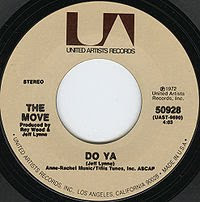 The Move weren't even Lynne's first band, of course. But the fact that they were all but unknown in the US and that their version of this song was not only not a hit but in fact necessitated the almost identical ELO remake, is probably proof of the non-existence of God. Or something.

[Shameless Blogwhore: My parallel Cinema Listomania -- theme: the movie (good, bad or embarrassing) that always makes you cry! -- is now up over at Box Office. As always, I'd take it as a personal favorite if you could go over there and leave a comment, thus reassuring management that my exorbitant freelance fee wouldn't be better spent on hookers and blow for the staff. Thanks!]
Posted by steve simels at 12:00 AM

Rick Wakeman (from Strawbs to Yes)

Keith Emerson (from The Nice to, of course, Emerson, Lake and Palmer)

Mick Jones (the one that went from Spooky Tooth to Foreigner, not the Clash guitarist)

On a related note:

Peter Frampton (teen idol success in the UK with the Herd, but more well known from his days in Humble Pie, and, of course, the brief Frampton Comes Alive era of his solo career)

Mick Taylor (from John Mayall's Bluesbreakers to the Rolling Stones).


I'll leave it at those six--and I don't see any folkie acts (maybe Strawbs, but only slightly) in the mix.

Quick correction: The name of the leader of Trip Shakespeare/Semisonic is Dan Wilson, not Matt Wilson.

Mick Jones is a good one, because he was Leslie West's second guitarist before Foreigner.

Sorry about the Matt/Dan Wilson confusion. That's what I get for looking at wiki rather than my CD collection, i.e. I actually own that crappy Dan Wilson solo record produced by Rick Rubin that was supposed to save Sony Records.

The Birds (Ron Wood) Leaving Here could be the best version of that song.

Greg Hawkes of the Cars -- from Martin Mull's Fabulous Furniture.

Does Alex Chilton count? Though Big Star was initially much less successful than The Box Tops, these days he's probably more well known for the former.

How could you overlook the Rising Sons? Ry Cooder AND Taj Mahal? Granted, that isn't exactly powerpop, but it sure ain't chopped liver!

The Rising Sons -- I hang my head in shame. Point taken...

As great as The Rising Sons were, is their output "better" or "worse" than the solo work of Taj and Ry? That's some pretty hefty catalogue to just dismiss. (Then again, I misread the question, as you can see by my first entry.)

Sal -- I wasn't suggesting that it was a question of early work being better or worse than later.

Just mulling the differences, which ever way they tend...

John Mayall's Bluesbreakers spawned a few great musicians: John McVie, Peter Green and Mick Fleetwood, who went on to Fleetwood Mac, and Clapton (although he was probably already well-known in England from his days with the Yardbirds).

I first heard of Rod Stewart and Ron Wood when they were with the Jeff Beck Group (sense a Yardbirds theme here?)

Al Kooper and Steve Katz of the Blues Project went on to form Blood, Sweat & Tears.

BTW -- anybody think that isn't Bruce Thomas in the Sutherland Brothers clip?

I checked the chronology in a number of places, and I can't find any indication that Thomas quit the band before the video was shot.

But I'm having trouble picturing the guy in the clip with short blonde hair and glasses a la This Years Model.

Two things regarding the "clue" below:

1) This really belongs with last week's "covers" list, and I can't believe I forgot about it, but I have ALWAYS wanted to see Springsteen cover "Girl, You'll Be a Woman Soon".

and b) What the heck does that clip below have to do with the topic of this list?

Boz Scaggs - possibly the worst rock & roll name ever - played guitar for the Steve Miller Band before he became whatever he is today. (Last couple of records have been pretty fine and bluesy).

There's a Todd Rundgren parallel with your Jeff Lynne choice - a couple of his Nazz tunes were re-cut as a solo artist (including Hello It's Me) and became big smelly hits.

Well there was Sam Cooke with the Soul Stirrers (though I'm not really familiar enough with those records to pick a particular one).

Also, if songwriting counts as being a featured artist there are lots of examples... like Sonny Bono on Needles and Pins? Which suggests another category of pop artists who became U.S. Congressmen...

And I always liked Marshall Crenshaw starting out as John Lennon in Beatlemania... and that would count, if he is featured on the "original cast album...."

I might be opening myself up for mockery but Blue Angel was Cyndi Lauper's band before she hit it big.

Saw a comment you made at Dependable Renegade, clicked on your name, and voila!

Nice blog you have here.

I actually like Blue Angel, but that's kind of a personal thing, because I know -- and have played occasionally -- with their brilliant guitarist, Arthur Neilsen.

Do the Quarrymen count? ;)

If not, how about Tom Petty in Mudcrutch?

Btw...I didn't mean to cause a stir upstairs with the Rising Sons. I took the challenge to mean someone's pre-fame group. I don't think anyone can argue that the Rising Sons' output in any way rivals either Taj's or Ry's solo career.

As I read it, you don't say anything about the later act being good. So I give you Clover, which gave the world Huey Lewis and which is notable mostly for being Elvis Costello's backing band on My Aim Is True.

I wouldn't have remembered if it weren't for all that Bruce Thomas talk.

I confess to liking the Move's version of Do Ya better than ELO's, but overall I prefer ELO to the Move, at least ELO through their best disc, 1977's Out of the Blue. Their output after that delicious two-LP slice of pop (including some power pop) declined a lot in quality, and Lynne's misguided effort to revive the band a few years ago without sterling original drummer Bev Bevan (also the Move's drummer) was a "what was he thinking!!??" moment, but ELO in its prime was a helluva band. They were great in concert too, and not just for the light show.

I could potentially add Joe Walsh after the James Gang, but on further thought, the Gang had some decent hits, and Walsh's solo career wasn't that much bigger than the James Gang. I'm not counting his membership in the Eagles, because he was never really more than a hired guitar for Frey and Henley (and too cool for their room, if either of them knew cool from a hole in the ground, which is where they'd be if there was any justice in the world...Henley, anyway).

Since I'm already stretching it with Walsh, I'll stretch some more: Aimee Mann, solo artist, vs Aimee Mann, member of 'til Tuesday. I suspect that 'til Tuesday is still better known amongst those who came of age watching MTV in 1983-1985 than Mann's career as a solo artist, but if so, shame on them. A society where female "artists" such as Britney Spears, Rihanna, and Gwen Stefani make bazillions and Aimee Mann toils in near-obscurity is completely fucked, says I. The Forgotten Arm is one of the great masterpieces of the last decade, and her other stuff is nearly as marvelous.

cthulhu, your points are all well taken but i have a quibble or two. 1. I think you've given short shrift to Joe Walsh's solo stuff: for a few years he got a lot of airplay and sold quite a few records. "Life's Been Good" was a ubiquitous radio song, and "Life of Illusion," "Over and Over" and "In the City" from The Warriors soundtrack were also very familiar to FM radio listeners. And while Aimee Mann's last few records have not made much of an impression (all quite accomplished but a bit ..samey, iMO) her contributions for the Magnolia soundtrack had her on the Grammys and garnering a good bit of well-deserved renewed attention. Til tuesday had that one monster MTV hit but that's about it, as far as the public was concerned...

Coming in late, but I noticed no one mentioned Lyme & Cybelle, featuring a teen-aged Warren Zevon, or Tomorrow, a nifty psych-pop outfit featuring Steve Howe on guitar.

Oh damn, apparently Paul McCartney was in a band before Wings...

Also late to the party but how about