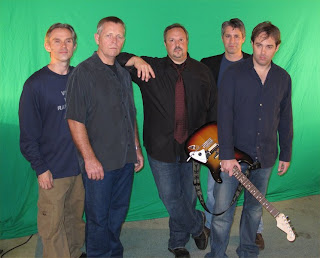 Sorry for my relative silence recently: I've been doing brave battle with the Manuscript that Never Ends, which is, finally, inexorably, drawing to a close. I promise.

But I have loads of catch-up to play here: bands which have sent me CDs, new releases by Paul Collins & Dwight Twilley, and a few observations I've been stewing on. At some point I will even hep you guys to my overarching theory about the failure of Big Star distribution and the subsequent cut-out-binning of same in a few specific regions and thus the relative overabundance or paucity of power pop in particular regions. Seriously.

But today, I want to talk about my new bandcrush: Vegas With Randolph from Fairfax, VA.

Now, I openly admit that part of me will always be thirteen where music is concerned: I have a remarkable ability to turn off my inner grownup when the song is catchy enough. But dig this adult love song, which positively shimmers. IMHO. (How much do we love that she's there all the time?)

(Well, hell. I can't figure out the letterbox thing. DOuble click it and watch it at the youtube, I guess.)

The peculiar name of the band references a trip that never happened: a jaunt to Vegas with a bunch of high school buddies (including one named Randolph, natch, who promised to make the trip colorful): as the trip approached, Randolph backed out. So they called the band after "the great misadventure that never was." The actual Randolph does wear his VWR t-shirt, they assure us in a recent interview.

They've been a band for about five years, but the songwriting partnership at the center of the band, John Ratts and Eric Kern, have been friends of many years' standing. They record in their home studio and self-produce; they're focused on writing and recording now as opposed to playing out much, though dates are promised once the second full-length CD is out this fall. (Kid C, I can crash on your couch, right?)

They cite as influences bands like Fountains of Wayne, so you know they're on the right track. And VWR has been known to hit that kind of tough balance FOW does in their best stuff: ironic self-deprecation without sneering. Consider, for example, the charmingly confessional "Marisa":

And indeed, who among us is not? Hell, I'm a straight woman, and I love her.

Probably my favorite VWR song is one that embodies all too well why you all have seen so little of me recently. No video for this one (yet), but it's on FB at their page, and on iTunes and Amazon and every place we look for music. I offer a sample lyric from the sublimely energized "Some Time to Live":

he gets up every morning at 6:30
so he can beat the traffic
try to get to work early
he starts in on the first thing
but soon gets interrupted
by the time he's had some coffee
he's discovered fourteen others
well he's not back to that first thing
by the time his friends are leaving
so another time this week
he'll be staying through the evening again

The only complaint: sometimes this one cuts a little too close to home, you know? But as soon as I heard this song, I immediately went out and bought everything they've released. Because I'm just that kind of geek.

And it would be remiss not to mention that they have kids' songs, which, of course, my kids love (though, thankfully, they are past the sippy-cup stage).

We'll keep you posted here about any VWR news we get, too. Enjoy!
Posted by NYMary at 6:33 AM

That first video had me from the minute I saw the blue Rickenbacker, which only shows you the kind of geek I am.

And the Marisa song speaks for me too...

Very pretty melodies and I like their playing and singing, but I've finally figured out you & I have very different tastes in lyrics.

I'm not as interested in songs that celebrate the minutiae of everyday life; I guess because I'm already living everyday life? I think I've always looked to art -- high or low, classical or pop -- to take me someplace I haven't been before, not necessarily to show me where I am.

This is not a knock on either of us, rather an attempt to figure out why, since I respect your taste and ideas tremendously, I don't always respond with more visceral enthusiasm to some of your musical recommendations.

Then again, it could just be me farting into the wind....

I'd like to hear the songs w/o look ahead limiting and brick-wall mastering. But then I've said that about all the new stuff I've heard the last decade.

Like the first one a lot and the lyrics of the third. Second one, not so much. Not a big fan of repetitive lyrics. Unlike Gummo, I love wordy lyrics that celebrate the minutiae of life.

meh. They obviously like power pop. They know the chords, they have the chops but they don't have the faintest idea what to do with them. Music trapped in a cul de sac.
No creative spark.
For interesting new music that uses power pop as a starting point please see
Jenny and Johnny

Thanks NYM! Cool band, I really appreciate the lyrics to the last song. I never got the Marissa thing, but I like the song.

Glad you are back!

Gummo,
Interesting, compelling observation. It's true that I have a real prejudice in favor of the mimetic: I like kitchen-sink lyrics. Aand so much pop is about those distant bitch goddesses: it's nice to hear someone rock out over the stresses I understand, like trying to find time to have lives--together and individually--around the stresses of child-rearing.

Michael,
A chacque son gout, and all that. I haven't bean around much lately, but as a general rule, I don't have much patience with "hipper-than-thou" games, since anyone who listens to power pop has already been so exhaustively lectured on how much Your Favorite Band Sucks that we're pretty much inured to it by now. I've had the lecture from fans of classical music, and jazz, and metal, and hardcore, and blues, and folk and hip hop and pretty much every genre out there. Yawn. At least I'm not getting clove cigarette smoke exhaled on me this time.

Thanks for the lecture.
I thought this was at a critic's blog - a place were people discuss the merits of music. Agree, disagree, present arguments. Would think that having different opinions is allowed.

Don't smoke, never have. Don't go to bars. Have wife and child, found no comfort/insight in songs.

Obviously our taste differ. That doesn't make my opinion greater or lesser than yours.