Where's Casey Kasem When You Need Him?

Well, as you may know, I've been kind of busy for the last couple of days, so I'm just catching up with some interesting and/or alarming news items; perhaps you've been out of the loop as well, so I'll share them with you.

1. On Friday, the world learned -- via a full-page ad in the New York Times -- that Cigar Aficionado (a magazine whose cover has been graced by the cherubic visage of Rush Limbaugh, among other worthies) had announced the winner of it's coveted 2012 Cigar of the Year award. I am not making this up, obviously.

2. And on Saturday, via the intertubes, I (along with many others) was reminded that it was the 40th anniversary of the release of Bruce Springsteen's debut album "Greetings From Asbury Park, N.J." 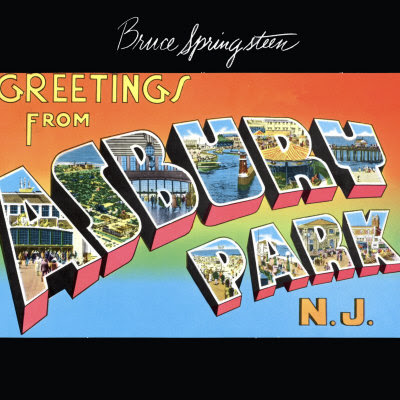 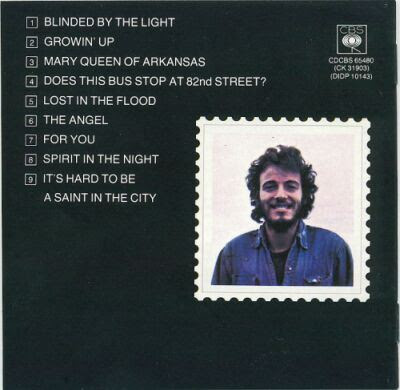 This, of course, did not make me feel in any way old. At all.

In any case, I'm still kinda busy, so in celebration of that anniversary, I thought I'd repost a piece I did about Springsteen for the Barnes & Noble website back in the late 90s (the occasion was the release of that huge coffee table book of Bruce's collected lyrics).

Enjoy, if at all possible.


THE WILD, THE INNOCENT, THE E STREET SHUFFLE AND ME

That Bruce Springsteen changed a lot of lives is both a truism and a cliché, although at this moment, if one is feeling uncharitable, it may be a rather naive and adolescent cliché. After all, 25 years after his first album, "Greetings from Asbury Park," Bruce is an institution (he's now eligible for the Rock and Roll Hall of Fame, if you can believe it), and his music has changed in ways few of us expected (although we probably shouldn't be surprised about it). Springsteen now resembles a plainspoken populist like Merle Haggard far more than a generational spokesperson/poster boy like, say, Kurt Cobain. And the people whose lives Bruce most radically affected are, of course, now comfortably middle-aged, with more on their minds, understandably, than rock dreams. Face it: To paraphrase an early Springsteen song, it's hard to be a saint in the city when you're worried about making your mortgage payments or finding a good preschool.

Still, cliché or not, Bruce did impact more than a few lives, and if you want to know why, at least part of the reason can be found in the just-published Bruce Springsteen: Songs, a massive coffee-table tome featuring the complete lyrics to every song found on every one of his albums (save the simultaneously released "Tracks"—more about that later) as well as Bruce's reflections on what he was thinking at the time. What's most surprising about Songs—for me, at least—is just how well the stuff holds up on the page. It's a given, of course, that Springsteen is a great storyteller. Back in 1981, I noted, in a review of his "Nebraska" album, that the song "Highway Patrolman" would probably make an interesting film someday, so I was not exactly shocked when Sean Penn adapted it as "The Indian Runner" a decade later. Still, given Springsteen's penchant for overheated, fuel-injected romanticism, I was pleasantly struck, seeing these lyrics in cold type after all this time, by how even the least of them are redeemed by flashes of humor and wordplay. I was particularly taken reading "Thunder Road" (from "Born to Run"): Bruce has gotten a fair bit of feminist flak over the years for the line, "You ain't a beauty but hey, you're alright," but such complaints seem misguided in light of the line that immediately follows: "Oh," he adds, in what strikes me as an ineffably funny, apologetic attempt to deflect that very criticism, "and that's alright with me." What a gentleman.

But we were speaking of life changes. My own Springsteen moment was in early 1973. At the time, I was a baby rock critic at the old Stereo Review, and "Greetings from Asbury Park" had just come out, accompanied by reams of Columbia hype, the gist of which was that Bruce was (what were they thinking?) the latest New Dylan. Little did I know, of course, that for the rest of the more jaded rock press, this tag had the sort of negative connotations associated with phrases like "serial killer" or "record company weasel." In any case, in my naïveté I gave the disc a spin, and sure enough Bruce was spewing the sort of freely associative lyrics that could most charitably be described as Dylanesque (if not, more accurately, verbose and in need of a good editor), and I recall being mildly unimpressed. And then suddenly: Boom! A drum beat and Clarence Clemons's near-mystic sax wail announced "Spirit in the Night," and I was a goner.

The music was perfect, like much of Bruce's stuff to come: a sort of Proustian mix of half-remembered licks from rock and R&B oldies that may or may not have actually ever existed, the whole thing sounding simultaneously sublime and absurd, like Van Morrison at his most uplifting, jamming at a South Jersey pizzeria. And the song's lyrics were—and are—the most dead-on evocation ever of what it felt like to be a post-Woodstock 20-something with no direction home. I personally had the eerie feeling that Bruce had been reading my mail, and I later found I was far from alone in that perception.

As it happened, Bruce was making his semiofficial New York debut that week, on a double bill with the similarly debuting original Wailers. (To put this in perspective: This was at Max's Kansas City, a club that sat fewer than 200 people. I don't want to say, "Those were the days," but frankly, they were.) Every rock critic in New York showed up for what would be their first exposure to live reggae, and yes, the Wailers' opening set was rapturously received by all (few bands have ever had two front men as charismatic as Bob Marley and Peter Tosh). After intermission, however, I realized that the aforementioned highly jaded press contingent, having already had their tiny minds blown by a bunch of Rastas turning the beat around, were not about to fall for any "New Dylan" hype and had beaten a hasty exit. This left me in the odd position of being alone in the back of Max's with 30 or 40 of Bruce's buddies from the Jersey Shore. I was, literally, the only stranger there.

And the show was everything I'd hoped for, and more. Bruce and his E Street Band opened with a version of "Spirit..." that made the album take sound anemic. He went on to preview the far richer material he had already written for what became his sophomore masterpiece, "The Wild, the Innocent, and the E Street Shuffle," going so far as to use a mellotron on a gorgeous "New York City Serenade" that sounded like a Phil Spector record made flesh. Most memorably, though, I got to witness an early incarnation of the sort of interactive, fan-friendly stagecraft that would soon establish the Cult of Bruce. "Any requests?" Springsteen asked at one point. "It don't have to be one of ours." I blurted out "Route 66," having been listening to a lot of early Stones that week, and to my amazement, Bruce and band immediately launched into the best rendition of that chestnut I had ever heard. Who'd have thunk it: On top of everything, these guys were the bar band of my dreams.

You know the rest of the story, of course. Bruce's live show became legendary, his fans became famous for their missionary zeal (the sort of people who bought tickets for unbelieving friends), and eventually the kid from Asbury Park made "Born to Run" and wound up, simultaneously, on the covers of Time and Newsweek. Around this time, Bruce also became the second most widely bootlegged solo artist in the history of recorded music; most of those fan favorites are now, finally, officially available on the four-CD "Tracks" box set, with the conspicuous and peculiar omission of "The Fever," perhaps the most mesmerizing performance Bruce ever committed to tape. So what's the bottom line? Even if you're a lapsed fan like me (mortgage payments and all that), Songs is going to remind you that, yeah, you weren't crazy. Maybe the guy didn't literally change your life, but he sure as hell enriched it. Thanks, Boss.

I should add that I've become a Born Again Bruce fan in the years since I wrote that.

and if you go to the cigar of the year link, you can watch a video of two guys smoking one! each, i mean...a cigar, that is. thanks, cigar aficianado.

I thoroughly enjoyed it. Thanks.
I might have to hear "Greetings From Asbury Park" someday.

And I was like one of those other critics. I went with Bob instead of Bruce. I still rather hear "Rastaman Vibration", "Burnin'", "Catch A Fire", "Live", or "Natty Dread.
I never saw Bob live, but have seen Bruce a couple times and he is a motherfucker on stage.