This is, as I have been wont to say here on many previous occasions, a very sad story, so please try not to laugh.

It also has a certain relevance to today's festivities, which will be revealed later in the narrative. Please be patient.

Anyway, so the other day I was in a cab heading down the West Side Highway in a snowstorm, and the driver had the radio tuned to whatever soft-rock Lite FM station they inevitably have on when they don't have WINS News Radio blasting or some guy from Queens yelling about sports.

1. I had definitely heard it before.

2. It was probably from the 70s or the 80s, although I couldn't rule out the possibility that it might have been more recent, and it had that whole California soft-rock vibe, which I usually detest, in spades.

3. I had no idea who the guy or the group singing it was, although I was painfully aware that when and if I found out I was gonna kick myself. Because pretty much everybody in the world, at least of a certain age, would have been able to recognize it instantly.

The truly insidious part was that there was something about the damn thing that grabbed me. Yes, the vocals had that laid-back L.A. Mr. Sensitive shtick that usually makes my gorge rise. But the tune was charming, the voicings of the harmony parts in the chorus were really quite lovely, and -- try as I might to deny it -- it was getting under my skin.

Fortunately, because of the roar of traffic, I couldn't really hear the lyrics, although one word -- "architect" -- jumped out. "Hmm," I thought. "There's a word you don't hear in a pop song everyday."

Anyway, I then went about the rest of my weekend, but I knew with an absolutely dread certainty that I was gonna break down sooner or later and look the song up on the Intertubes.

So, late on Monday, I googled "Soft Rock song with the word architect in it" and up it popped.

Ladies and gentlemen, I give you...and my fingers are shaking as I type these words....Dan Fogelberg (the horror, the horror!) and his 1980 smash (which I had apparently put out of my mind, probably deliberately, ever since its original vogue) "Same Old Lang Syne." 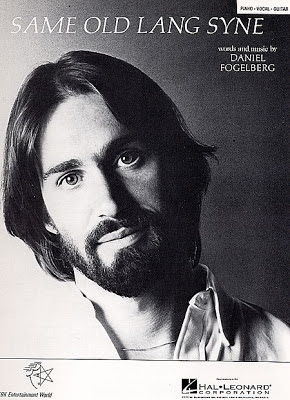 We all have songs in our musical closet like this, you're forgiven.

It is pretty bad.

C'mon now, let's not speak ill of the dead on New Years Day. He actually made some good songs, especially Leader Of The Band, which makes me kind of tear up sometimes.

Dan's from my town, Peoria IL so we've heard plenty about him over the years. This story actually happened and there is now a plaque on the street sign where the grocery store was.

At his peak his records went multi-platinum so he connected with a few folks.

The opening melody BTW is cribbed from "The 1812 Overture."

Wow, so glad I was able to miss out on top 40 in 1980. I probably would have been a sucker for a song like that then (the whole meeting up with old girlfriend minor chord genre I was particularly sensitive to at the time).

I won't laugh, but dude, that song sucks.

As Fogelberg stated on his official website, the song was autobiographical.[5] He was visiting family back home in Peoria, Illinois in the mid-'70s when he ran into an old girlfriend at a convenience store.

After Fogelberg's death from prostate cancer in 2007, the woman about whom he wrote the song came forward with her story. Her name is Jill Greulich, and she and Fogelberg dated in high school when she was Jill Anderson. As she explained to the Peoria Journal Star in a December 22, 2007 article,[6] they were part of the Woodruff High School class of 1969, but went to different colleges. After college, Jill got married and moved to Chicago, and Dan went to Colorado to pursue music. On December 24, 1976, they were each back in Peoria with their families for Christmas when Jill went out for eggnog and Dan was dispatched to find whipping cream for Irish coffee. The only place open was a convenience store at the top of Abington Hill where they had their encounter, located at 1302 East Frye Avenue. Today, the store is still in business and is now called Short Stop Food Mart. They bought a six pack of beer and drank it in her car for two hours while they talked.

Five years later, Jill heard "Same Old Lang Syne" on the radio while driving to work, but she kept quiet about it, as Fogelberg also refused to reveal her identity. Her main concern was that coming forward would disrupt Fogelberg's marriage.

Looking at the lyrics, Jill says there are two inaccuracies: She has green eyes, not blue, and her husband was not an architect - he was a physical education teacher, and it is unlikely Fogelberg knew his profession anyway. Regarding the line, "She would have liked to say she loved the man, but she didn't like to lie," Jill will not talk about it, but she had divorced her husband by the time the song was released.

Well, it could have been worse - Christopher Cross anyone?

And may I also say, and for the record, that the bluesy sax solo at the end just ruins the whole thing.

I did a session once with Michael Brecker, and he's a very nice guy as well as a terrific player, but jeebus, does that thing ever kill the whole wistful mood of regret the rest of the song works so hard to achieve. I'm sure it seemed like a good idea, conceptually, to either Fogelberg or whoever produced that, but sheesh. Just awful.

I like a little bit of Fogelberg -- this song, Leader of the Band (for personal reasons; my Dad taught me to play the drums), and Part of the Plan are all okay in my book. (Not great, but okay.) And Same Old Lang Syne has some genuinely well-written lyrics.

He also has a live version of Listen to the Rhythm of the Falling Rain that is one of the rare ballads on my iPod.

The rest of his oeuvre? Meh.

Even so, that batting average -- 4 out of perhaps more than 100 -- beats most artists who have ever gotten an album deal.

So I don't have the stomach to slag him for working in a genre that doesn't reach me most of the time.

I'm not much of a Fogelberg fan myself,however,I do like some of the hits he had like "Longer","Leader of the Band","Rhythm of the Rain" and a few others.I like all kinds of Rock and Pop music,from Hard and Soft Rock to Folk,Jazz,Country.It's good to balance your sensitive and aggressive sides in music.That's why so many groups like the Beatles,U2,and others were so great.Budd

A well-crafted lyric, you have to admit. Beats Harry Chapin all to Hell and gone.

It is a weird feeling being confronted with a song, or piece, or whatever, from a genre of music that you are SURE you hate with very good reason, only to hear a song that you don't, and then have to come to some kind of realization that you probably over-generalized, which is REALLY easy to do.

It is even easier to do if you are in a place without control over the music, like the back of a cab, or in a restaurant, or something. That is where I've had some big revelations.