God and Man at the Richard Rodgers Theatre

Saw The Rascals Once Upon a Dream retrospective concert show on Broadway Thursday night; I'll let ace rock critic David Browne, writing in Rolling Stone earlier in the week, speak for me on this occasion. 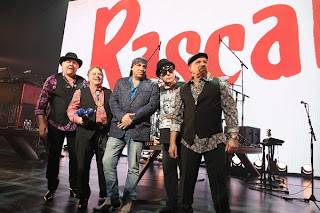 Are the Rascals the most underappreciated and influential band in rock? Arguably New York's first great band, they had an astonishingly varied repertoire – these were the same guys who gave us the beach-stroll beauty of "Groovin,'" the most raucous cover of "Good Lovin'," the white-guy soul of "Lonely Too Long" and the blissed-out pop of "A Beautiful Morning." They've also been covered by Pat Benatar (who did a pretty faithful remake of "You Better Run"), and long before the White Stripes, the Rascals had no use for a bass player. And they were wearing little-kid knickers years before Angus Young.

For years, another longtime devotee, Steven Van Zandt, tried unsuccessfully to broker a reunion of founding members Felix Cavaliere, Eddie Brigati, Dino Danelli and Gene Cornish despite years of bad blood between them. "These guys are such gods to me," he told Rolling Stone in 2009. "There should be statues of them." With The Rascals: Once Upon a Dream, Van Zandt has finally come as close as possible to constructing those monuments.

Opening this week and continuing through May 5th, the two-hour Broadway production brings together the original quartet for their first extended performances together since Brigati left the band in 1970. Van Zandt wrote the script and co-directed it (with Marc Brickman, who has designed and lit shows by bands including Pink Floyd).

It's first and foremost a reunion concert, with the quartet augmented by three backup singers, a bassist and an additional keyboardist. It's also partly an offspring of Behind the Music, since the Rascals tell their story through filmed interviews interspersed throughout the show (albeit with a largely upbeat tone, like the first half hour of your typical BTM). The show is also a little bit Jersey Boys, thanks to additional footage in which actors recreate key scenes in the band's story, from the time Brigati was accidentally shot by his brother to the time they were asked to remake the Olympics' hit "Good Lovin'" (which earned a standing ovation when it was performed midway through Once Upon a Dream).

Fortunately, what could have been a mess mutates into an entertaining and fairly seamless show. From the repertoire to the photo collages behind them, Once Upon a Dream takes the Rascals from their bar-band, R&B-covers days (when they were the Young Rascals) to hitmakers to New York hippies. They're no longer young, in name or age; Cavaliere is now 70, and the others aren't far behind. But over the course of two hours, they gamely recreated their old stage personae: keyboardist-singer Cavaliere's fist-in-the-air exhortations, singer Brigati's dancing-with-tambourines moves, guitarist Cornish's goofy showboating and drummer Danelli's drumstick spins. Also returning were some of the paisley shirts from their Summer of Love period: As hard as they tried, the Rascals were never truly hip, then and now.

But as Once Upon a Dream rams home, cool points weren't quite the point. Before they broke apart, Cavaliere and Brigati were a tremendous songwriting team, and they weren't afraid to be jubilant, excitable boys, on record and onstage. The show opens with the charging "It's Wonderful" and closes two hours later with their civil rights plea, "People Got to Be Free." In between aren't just the biggest hits but plenty of others – the jubilant "A Girl Like You" and "If You Knew" – that attest to the durability of their catalog. Dipping elsewhere, they resurrect obscure album tracks like the trippy garage-band swirl of "Find Somebody" and the spaghetti-Western swagger of "Sueno," both from 1967's Groovin' album, as well as lesser-knowns like the Southern-soul-influenced "Carry Me Back."

Brigati can no longer hit all the supple high notes in the unabashedly sentimental "How Can I Be Sure," and there were opening-night problems, like under-miked voices and a mix that sometimes buried Cavaliere's organ. (And what's with the clip from Pam Grier's Seventies blaxploitation classic Foxy Brown for a show rooted in the decade before?) The ending, which blames their breakup on bad management, feels a bit too simplistic. But Once Upon a Dream compensates with a set list that never lets up, and with the tale of a bunch of regular Jersey and New York guys who naively pursued a dream of blending rock, R&B, soul and psychedelia before anyone else thought it was possible.

I had 11th row seats for last night's performance, and I have only one word to add to the above.

Also: Dino Danelli is in fact God. And Gene Cornish turns out to be a much more interesting guitar player than I'd remembered.

Oh, and they did my favorite Rascals song of all time, too. 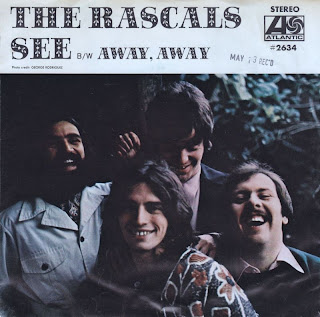 Great stuff Steve. Felix and Eddie were a hell of a songwriting team. Great vocals and the boys could play. Thanks.

and their still HIP

Had a ball. And yes, they are still HIP.

So cool. Wish I lived a couple thousand miles closer to NY. One of my favorite of all time bands. I heard about the show back in Oct. and glad you got to see it Steve.

A blast from the past.
What a great song...
I love Danelli's playing.

it's too bad they have to go the cheesy "Jersey Boys" route to be appreciated like they should be.

it's too bad they have to go the cheesy "Jersey Boys" route to be appreciated like they should be.

That's not at all what they did. Clearly you haven't seen the show.