Over On the Plus Side of the Ledger, At Least Those Striped Shirts Have Finally Come Back Into Style

So over at Facebook the other day somebody trotted out the old "what's the band/performer you most regret not having seen live when you had the chance?" poser.

Which is, of course, a question I'm pretty sure we've batted around here at some point as well. And as usual, my immediate reaction was Buffalo Springfield and the MC5.

But that also got to me thinking about a slight variant to the question -- as in "what's the band/performer whose records you particularly enjoy but whom you not only have never seen live but in fact have barely any idea what they looked like or what they were about in concert?"

And immediately I thought -- the late Phil Seymour. 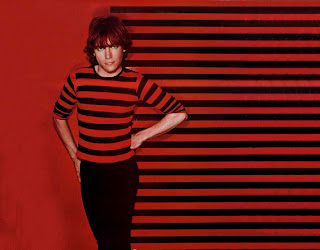 I'd seen him on TV as a member of the Dwight Twilley Band, of course, but Seymour was a drummer back then, not a frontman. Meanwhile, I really like the guy's solo stuff -- particularly his cover of Bobby Fuller's great "Let Her Dance," which I rhapsodized about in these precincts back in 2009 -- and I realized I have no idea what he was like at center stage.

So -- YouTube being the veritable Library at Alexandria that it is -- a little research turned up two clips. First: from 1981, Phil and band being interviewed by Dick Clark on Bandstand before a performance of "Let Her Dance"...

...and then the official video for the song itself.

About that video, of course, I can only say that Phil's "Let Her Dance" remains a great record. If you know what I mean.

Phil's debut solo album was great from beginning to end; so many great pop songs. I'm a firm believer that if he had not gotten sick when he did, he would have eventually been bigger. He also had the classic backing vocals on Tom Petty's American Girl and Breakdown.
-BlakeS

I'd forgotten that he was on the Petty records....

Here's a better video
Precious To Me

(Is my gaydar off or was Phil gay?? Not that there's anything wrong with that.)

I've been thinking that since I unearthed the two clips here.

If he was, I can understand why the hell he wanted to get out of Oklahoma....

Holy crap -- that Precious to Me video is shot in the Bradbury Building!!!

I have to visit that place before I die, seriously.

Steve,
Ever see "DOA" with Edmond O"Brien? The Bradbury Building is used to great effect in it.

DOA's one of my all-time favorites.

The Bradbury also figures prominently in DEMON WITH A GLASS HAND, the Harlan Ellison-written episode of THE OUTER LIMITS, which warped my childhood.

That there is some solid powerpop.

MJ might have a point. Something is on the radar.

I picked up an odds and ends CD comp of his stuff in a bargain bin with his hits and other stuff including DC5's "Come Home" Ragavoy's "Stay With Me" and something from a Bee Gees tribute album ("First Mistake I Ever Made"), Harrison's "I Need You" and "Running," later an 80's chart entry for Chubby Checker.

I saw Phil play with the Dwight Twilley Band in '77 and he was drummer and co-frontman- a second drummer played behind him. Interesting to see the late Bill Pitcock IV again; he played with Dwight a few years back at Chicago's Beat Kitchen and I got to chat him up and shake his hand (Ron Flynt from 20/20 was on bass and guys from Cheap Trick and Shoes were in the audience). As for the gaydar thing, I think perhaps Phil was just spacey and/or coked-up on Bandstand.

Maybe not so much gay, but fop.

He was somewhat Jagger-ish, and who would ever dare to imply that that guy was gay?
I have his 2nd album. It's pleasant enough, but not really Premier League Power Pop as far as I'm concerned.

Precious To Me is so great. And just thinking about the record cover to Phil Seymour 2 cracks me up! I need to check out his story...