She's About a Mover

Attentive readers with long memories may recall the story of my old collaborator Carol Bokuniewicz, who as a teenager was responsible for The Worst Album Cover of All Time... 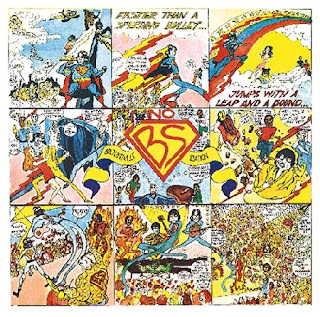 ...before eventually achieving lasting fame as a co-founder of M & Co., the hugely influential design firm whose wristwatch...

...is one of the most iconic images of the last several decades.

In any case, Carol's obviously done lots better album covers over the years since Brownsville -- the most famous is still probably the one for Talking Heads' Remain in Light -- and back in the late 70s/early 80s, in particular, she was turning out really wonderful stuff for Hannibal Records, the custom label run by the great producer Joe Boyd (of Fairport Convention and Nick Drake fame).

The first project (as I recall) Carol undertook for the label was the eponymous debut LP by vastly entertaining Tex-Mex revivalists Joe "King" Carrasco and the Crowns. The album, produced by rock crit worthy Billy Altman had come out in England on Stiff, who for some reason declined to release it in the States; Boyd changed the track listing a bit and asked Carol to rejigger the cover on the cheap and quickly. The old sleeve had been fairly straightforward -- a shot of Joe in full stage regalia against a plain background -- but for the new one somebody (perhaps Joe himself) came up with the concept of Carrasco Hot Sauce; Carol stole some elements from the old one, added some new ones, and asked me to come up with some gags (visual and otherwise) to add to the mix.

Here's the final result, front and back. Both of which tickle me inordinately, even after all these years. That's Carol as the model on the front, BTW. 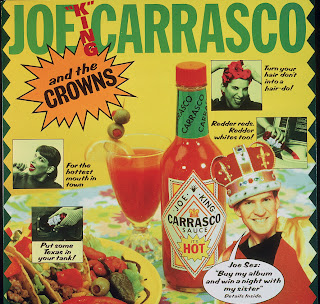 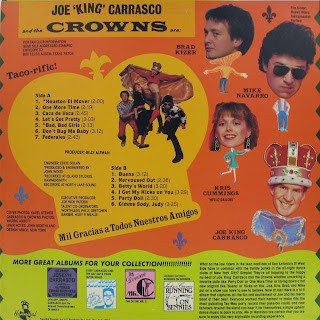 I should add that -- apart from the "Buy my album and win a night with my sister" joke, for which I will undoubtedly spend eternity in the netherworld -- I had the most fun with the little More Great Albums For Your Collection banner on the back; if your browser doesn't allow you to enlarge the image, the fake albums in question are Devadip Joseph Carrasco and His Altered Consciousness Orchestra, Ziggy Carrasco and the Gay Guys From Outer Space, The Divine Mr. C, and Jackson Carrasco's Running on Bennies.

Meanwhile, here's Joe and the gang back in the day with the opening track of the album, live somewhere in Texas.

Presumably, Joe's sister was in attendance but, alas, history does not record what she thought of the album cover.
Posted by steve simels at 8:40 AM

Fee Waybill in another life. :-)

I like the clip. The sister thing is a little unfortunate.

The gay guys from outer space?

Great album, loved the cover, still have the vinyl!

I remember (barely) great shows at Club Foot in downtown Austin circa 1981. Joe would climb up to the second floor from the stage with a very long guitar cord, crown and all. Good times.

Why aren't any of their albums available on CD? I used to love the song "Current Events and Making Me Tense," but I haven't been able to hear it in years.