Classic Rock From an Alternate Reality: An Occasional Series

In case you missed my post a week or two ago -- about the WSJ 70th birthday interview with Keith Richards -- here's an mp3 of the song that's the big revelation in the article: The original version of The Stones "Street Fighting Man."

With totally different non-political lyrics and some interesting differences in the mix (that's Dave Mason on that weird Indian oboe you can hear if you listen hard enough.) 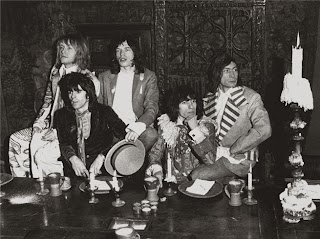 It's still great, and I'm sure it would have sounded equally good on Beggar's Banquet as the more familiar version, but obviously Mick and Keith and the gang were absolutely right to revise it. Incidentally, according to Keith, he came up with the line "What can a poor boy do?" and Mick took that and ran with it.
Posted by steve simels at 10:09 AM

Also members of Family contribute background vocals on the chorus.

It almost has a "Satanic Majesties Requests" feel to it. The missing link between the two albums?