Long time and attentive readers are perhaps aware that pretty much the first thing I ever posted at this here blog was a rave review of an album by... 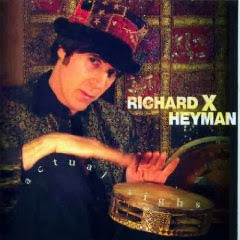 Jeebus, where has the time gone?

Anyway, I pretty much said it was a masterpiece, a judgement I still stand behind.

The short version: Richard has a brand new album out... 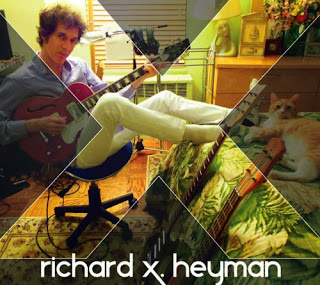 ...which I've just listened to, and I think it's at least as good.

A more eloquent response to it will be here on Monday. Wang Chung till then.

Does his cat play on it too? If so, it might the first non-RXH to play on one of his LPs. Can't wait to hear it!

Two RXH stories--one good, one not so good.

There used to be a series of shows at The Bottom Line called "The Beat Goes On," I think. One theme per show, many guest singers, usually a killer house band. Saw RXH plays drums and sing "Good Lovin." Knocked me out. Became a fan for life...

Went to see Adrian Belew's band The Bears at the Mercury Lounge. RXH was the opener. The friend I was with was friends with RXH. He asked RXH how he got the gig.

"Adrian actually tracked me down. He loves my records."

Heyman's set was great. He left during The Bears second song because he'd "seen The Bears before."

I'm sure I'm overreacting, but I still haven't been able to listen to RXH the same way since.

Hmmm. Never seen / heard of RXH. And easy to come up with snarky comments, based on the 2007 photo Sleeve posted. (if that was a 1967 photo, it's OK). But being Midwestern based for much of me life, I have seen Belew and the Bears. Waaaaay. overrated me thinks. Ok, but no cookie. Plus - seemed more of a one-off let's grab some bucks kinda thing. (Which is OK - that what big record labels want).

So - we need linky /info for RXH. Mucho Gracias

I bought "Hey Man! in 1990 as a cut out, largely because he played all the instruments, which I find fascinating, but it did nothing for me.

The greatness of Heyman raged undimmed through at least 5 albums (and offshoots). Last two (this new one and the thematic prior), however, have been dim echoes of what went before. Mainly rewrites and rehashes of earlier, better songs. The man should not leave himself open to the criticism of mere mortals like myself by recording so much. He has made his glorious statement over the course of a lifetime and should now retire or tour on the strength of his oldies. After all, this is a guy who wrote a song called "I'm a Civil War Buff" -- and pulled it off: Great song, great album, great career.

Is that you, Richard?

I've been an RXH fan since reading an "Album of the Month" review of "Hey Man!" in Stereo Review w-a-a-y back in 1991. Fast forward 20+ years and there's no greater musical pleasure to be had than to celebrate the release of the latest RXH masterpiece. "X" does not disappoint. Heyman tosses off instant classics seemingly without working up a sweat (and yet the years between and immaculate craftsmanship apparent on every album/CD underscore his meticulous approach to his craft). So many great songs on "X" -- new to my ears and yet they sound like the latest batch of greatest hits from one of rock 'n' roll's truly underappreciated geniuses. Heyman sings about friendship, mortality, disappointment, redemption, and as always his great love for wife Nancy. If you've never heard RXH before, "X" is a great place to start. If you've been a fan, your faith in his musicianship is reaffirmed by this latest effort.

I'm the anonymous above who described the most recent two RHX albums as "dim echoes of what went before". I'd like to make it clear that I was referring in particular to "Tiers" and "Other Stories" -- which were a huge disappointment and made me think our man had succumbed to toxiplasmosis or something.
RHX's most recent album, "X" is, by contrast, a total blast from beginning to end, and has been in constant play on my car and home CD since it came in the mail last week. The man's genius is on full display in song after song. My only quibble is a certain sameness in aural texture from song to song (and album to album) and too much echo. But RHX's songwriting genius and passionate vocals are in full working order -- its an inspiring, uplifting and entertaining that amazingly (considered his age and how long he's been at this) includes some of his best songs ever (as well as some oddities like African-ish "Birmingham" and an somewhat acoustic version of "Civil War Buff"). Thanks and congratulations to RHX for another great album, and thanks to Simels for being an early RHX adopter.