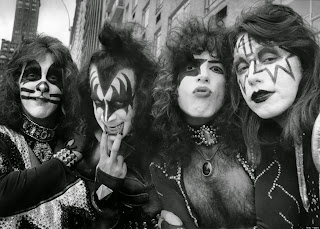 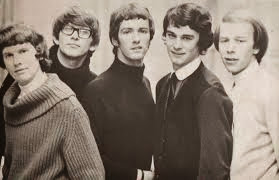 Any questions?
Posted by steve simels at 11:14 AM

Where does Weird Al Yankovic fit in?

KISS at their finest. "I just want to eat pizza!" And I love the whistling ---

You know, "Love Gun" (dumb, fun title aside), is a pretty complex song chord-wise. And a great Ace solo to boot.

And Care of Cell 44 (as I mentioned) is the best Zombies song.

I'm not sure what the point was. Two different types of songs entirely.

Never was a Kiss fan. I go to Zombies show the last few years and Rod talks about how Argent first did "God Gave Rock n Roll to You" even if you might know it from someone else. Having bought "In Deep" when it was released, I had to Google it to find out that Kiss covered it. I guess I was too old for Kiss.
But,that said, the RHOF has been a joke for years.

Exactly, two different groups. While I much favor the inventive music The Zombies crafted in their short career, Kiss has lasted 40 years. Their first 6-7 albums were not half bad. I enjoyed them in the early to later 70's, still like some of the songs. Still a lot of groups left out of the HOF, Deep Purple, Yes, Badfinger, The Move and even The Monkees. Still baffled myself how they pick on who's going to be inducted.

Oh by the way, Zombie fans. Get yourself over to the blog Willards Wormholes to download The Zombies EP collection 1964-66. You won't be sorry, it's terrific!

Interestingly, the demo of "Love Gun" was called "Penis."

...Which reminds me of that line that Robert Christgau had when he reviewed one of their early albums and basically remarked that if they were honest about where their interests really lay, they'd have named themselves Blow Job, not Kiss.

is that really starface's chest? and, yeah, it kind of looks like a hairy ass, but that's not what i meant.

Makes one wonder where Paul Revere and the Raiders fits in to the current "HOF" mind set. Schlocky TV show aside, me thinks they put out a pretty strong volume of work. Not in the HOF and probably never will be.

No questions at all.