And the 2013 Lou O'Neill Jr. Memorial Award for the Most Irksome and/or Preposterous Writer About Pop and Rock Goes to... 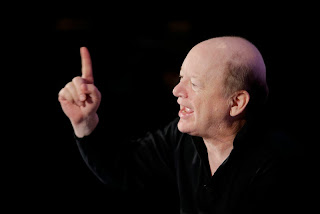 In case you haven't been playing the home game, Lefsetz has been an annoying philistine know-it-all for several eons now; he formerly peddled his wares via a subscriber-supported website (who paid to read the stuff is something I do not even want to imagine) but of late his oeuvre has been available on the intertubes, for free, to anybody with a modem and no fear of having their IQ lowered by exposure to it.

I bring all this up because last Friday the proprietor of this here blog commented on Facebook about Lefsetz' latest series of annoying declarative sentences posing as a think piece, calling it -- and I paraphrase but only slightly -- "possibly his most assholish post ever." When the proffered link to the piece didn't work, I asked her what it was about, and she replied -- and again I paraphrase but even less slightly -- "talent doesn't matter and everybody should be like Rihanna."

In any event, I read the thing eventually -- you can find it here if you're strong of stomach -- and as it turned out I concurred: It really WAS his most assholish post ever.

Now, to be fair, the larger point (if that phrase is actually applicable) he was trying to make -- that the record companies are in business to make money, that their idea of quality is simply what they believe will sell, and that artistic content is consequently irrelevant to their business plan -- is inarguable.

On the other hand, if you read the whole piece, it's quite clear that Lefsetz actually approves of this state of affairs. And it occurred to me that some guy whose name rhymes with Sleeve Nimels had said something similar, in the pages of The Magazine Formerly Known as STEREO REVIEW somewhat earlier...

Anyway, that's all an extremely roundabout way of getting to my real worry, which is, simply put, that because the vast sums of money to be made in the record business today have raised the corporate stakes so precipitously that no future performer who is not on some level a clone of an already established star is ever going to get a chance in front of the public again.

In other words, Bob -- no shit, Sherlock. How long did you ponder before coming up with that bit of blinding insight?

Oh and Bob -- congrats are in order for your win; that is some truly memorable wanking and I'm proud to bring it a wider audience. Heh.

Although I must admit that my pal Dave Lifton over at Pop Dose does a much funnier number on you than I ever could. Seriously, I'm not worthy.

that the record companies are in business to make money, that their idea of quality is simply what they believe will sell, and that artistic content is consequently irrelevant to their business plan -- is inarguable.

Thanks for the shout-out, Steve. I've become convinced that Bob's you're-useless-unless-you're-a-big-player schtick is his way of kissing up to the big names so that he can keep getting comped tickets and stuff. As I've said in other takedowns, that's always been his dream, but the highest he ever got put him in a position to get fired by Blackie Lawless.

Just a bunch of bullet points of conventional wisdom with delusions of profundity. Never mind the contradictions between the various rules - major labels just go where the action is, major labels can get stuff played on the radio no matter how bad it is, etc.

when he writes of the music of his youth he does it well.

Otherwise, should any 50-something be that invested in the business of today's charts and talentless mega-stars,searching for their relevance and meaning?

This subject is so dull I can't even come up with a comment.

buzzbabyjesus said...
This subject is so dull I can't even come up with a comment.

I get that the record companies want to make money. But it would be nice if they also took a few risks. Who knows? It might even pay off.

Can we just kick him in the nuts and be done with him?

Rock critics were more fun when they offered you a hand full of pills and said take what you what.

I don't actually think this post exposes Lefsetz as an asshole for the same reasons everybody else does. It's because the issues he's talking about stopped being relevant about five years after Steve S. wrote his Stereo Review version. Nobody in their right mind with a musical instrument at hand has any notion that anything he does will get played on any radio station other than WFUV, WXPN, et al. Musicians might like to see their work on some major label they're familiar with for nostalgic reasons, but the big labels' business plan now is, it costs $100,000 to make an album, loan us $100,000 and we'll make you an album (and not pay you back).

No, Lefsetz is an asshole for this other column he wrote in which he stated that Graham Parker's early albums produced by Nick Lowe weren't as good as the one produced by Robert John Lange, even though he couldn't remember a single song from the RJL-produced album. Reason: RJL produced AC-DC, therefore fists in air and you don't have to listen to Graham Parker anymore.

What ever happened to Lou O'Neill Jr.? I had his newsletters in the 80's and then he disappeared from Beatlefests/WLIR/Circus....