And speaking as we were of The Hollies last week, please behold in breathless wonder said band, with Graham Nash in 1967, running through their magisterial "On a Carousel" at Abbey Road Studios. 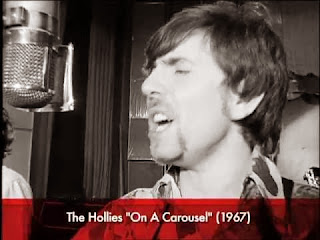 Words mostly fail me, but I should mention three things in particular.

For starters, a big thank you to guitarist Tony Hicks for letting us see exactly how he plays the song's great signature riff, including that little harmonic at the very end.

For another, if Bobby Elliott wasn't one of the coolest drummers of the British Invasion, than I'm Marie of Rumania

And finally, don't turn off the clip at the song's conclusion, or you'll miss about 30 seconds of the group a capella that will make the hair on the back of your neck stand completely erect.
Posted by steve simels at 8:00 AM

I've had this Doc for a while now. Very very good.

Yeah, good stuff on the "Look Through Any Window" dvd. And Bobby Elliott has that cool jazz look. Every time I hear this song these days though, I marvel at its innocence and think that nothing like this would stand a chance in today's market.

A few days ago cthulhu said...

"I am seriously allergic to Graham Nash; I feel the same way about CSN(Y) - if it's a Nash song or his vocal is prominent, I'm outta there."

Jeez Louise! Tony Hicks just sliding in with that low harmony kills me!

Nice. Tried to justify (to myself) the "cabaret" clip from last week as just "the way things were back then" ... until I saw the Kinks clip from 3 yrs earlier (raw and dynamic!)
So today's isn't raw either, but dynamic? yes. and some serious chops on display. Thanks for saving the H's for me.

That's amazing. I love Hicks' riff. Neat he played it through the neck pickup.

Totally agree about Boobby Hicks . Check out his fills around the 1.54 mark. SO cool.
http://www.youtube.com/watch?v=0oQ0kiRqQLk

Wow! Thanks for ending my year on a high note. And you're on the mark about Bobby Elliott. I think I need to see more.

Wishing a great new year to everyone here.