Total Victory is Ours, Comrades!!! 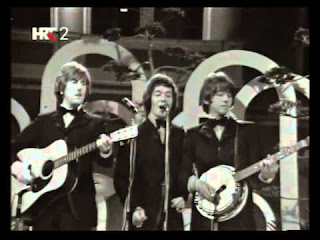 1. It is actually possible that The Hollies were staying at the same hotel as Mel Brooks, who was filming The Twelve Chairs in Yugoslavia at approximately the same time.

2. The Hollies probably had nothing to do after the show because Tito had the car.

3. This performance, although musically impeccable, is really kind of embarrassing. I mean, I had no idea that The Hollies were so totally a cabaret act at this point. No wonder Graham Nash was so hot to jump ship to Crosby Stills and Nash.
Posted by steve simels at 9:38 AM

Great stuff, Steve. The band was so exceptional vocally they never got much credit for their musicianship, which was stellar.

Tony Hicks has always been vastly underrated as a guitarist.

Bobby Elliott, of course, is one of the greatest drummers ever.

That cabaret aspect is why I've always considered them lightweights and not worth my time.

Their best records are superb. It doesn't get any better than "Look Through Any Window" or "Bus Stop."

Or "Carousel" or "Carrie Ann". Hicks' riff on the former tune is killer.

I can't argue with those. I'm also partial to "Don't Run and Hide."

Carrie Ann made me want to be a "prefect"', even though I had no idea what that was.

Thanks for this, Steve, although now it pains me that I never saw the Hollies live in their prime. I was especially happy to hear a personal fave, "Doo the Best You Can" live -- not too many songs with 2 banjos and a harmonica as lead instruments. The shtick doesn't bother me. In this case, I think a lot of it was their attempt to conquer language issues, in the same way professional wrestlers need to over-play so that even the folks in the cheap seats can see.

There's a killer live concert from 68 with Graham on the recent Hollies box set.

My two big problems with the Hollies (emphasize these are MY problems, not claiming these are universal):

One, not crunchy enough, except for, say, Long Cool Woman (are there others?). I like me some rockin' guitars...

Two, I am seriously allergic to Graham Nash; I feel the same way about CSN(Y) - if it's a Nash song or his vocal is prominent, I'm outta there.

Should I keep trying to believe, or give it up? (about item 1; I don't think there's anything that could get me to appreciate Graham Nash...)

Another great record the Hollies did, is "Pay You Back With Interest" (a Billboard Top 30 hit on Imperial in mid-1967): the tempo changes between the verse and the chorus and back again, the jazzy instrumental bit at the end, the bells (actual bells!) in the solo, and their usual strong vocal work combine to make this one of my all-time favorite British Invasion 45s.
By the way, Steve, about that Tito joke: I think Don Rickles came up with that line when he and Clint Eastwood and a bunch of other big names were on location in Yugoslavia (around 1969 or '70) filming the movie "Kelly's Heroes"and found there wasn't much night life to entertain them after a hard day's shooting.