Your Wednesday Moment of Words Fail Me: Special Vanda and Young Edition

I don't even know where to begin with this, other than to say this is a recent episode of RocKwiz. An Australian tv extravaganza that seems to be a sort of bizarre hybrid of Rockstar INXS and a game show.

In any case, this episode is a tribute to the genius that is Easybeats (and much else) auteurs Harry Vanda and George Young.

Like I said, I don't even know where to begin about this. Except possibly to say that as somebody who has been trying, for most of my adult life, to evangelize about the greatness of those guys to American chums with only fitful success, I never expected to ever witness anything quite so cool. And yes, a lot of the performers are mediocre, but who cares? [I love that Isabella Manfredi, however, for obvious reasons.] 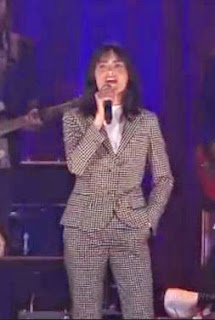 I should add that I did extremely well on the quiz portion of the show, which makes me very proud. I should also add that as a result of this show I discovered two terrific straight-ahead rock songs, by Aussie bands heretofore unknown to me -- "Am I Ever Gonna See Your Face Again" by The Angels...

...that Vanda and Young had a hand in.

I should also also add that I was turned on to this show by ace antipodean pal Peter Scott.

OK. This is the find of my week. Just awesome. It was better than CATS.

Why VH-1 hasn't bastardized this concept yet, I don't know (or have they?)

I remember the Choirboys tune from its frequent airplay on LA's shortlived KEDG-FM circa 1988. It made me buy the album, which, if I recall correctly, was uneven.

But it's one of those catchy hook filled songs that whacks you over the head in the beginning but doesn't wear well with time.

Great singer - Stevie Wright meets Freddie Mercury. Parts of the Choirboys tune owe a hell of a lot to John Cougar's "I Need a Lover Who Won't Drive Me Crazy."

I have an uncle who lived in Tasmania as an artisan for decades. Most of my cousins have now moved to the mainland in the Sydney area. I try to visit at least once a year. The flight's unending torture but the surf's worth it.

The Angels were revered by the hard rock crowd in L.A. My boyfriend, the drug dealing guitarist, used to shell out big bucks for their import LP's at Tower in Hollywood.

Speaking of Aussie bands, I kinda liked the Baby Animals as well. But they too had sometimes wondrous hits and uneven albums.

Here's just a little a taste of something that maybe the girls will like better than the boys, especially those with a sweet tooth for sin. Enjoy the eye candy.

The Choirboys album is pretty good, with a number of good powerpop tunes (leaning more to the power side, which I prefer).

Yeah, I think I liked about sixty per cent of the Choirboys CD. Crunchy stuff.

With regards to that episode of RocKwiz: You're more than welcome, young Steve.

By the way, if there's anyone reading this who'd like a high-definition version of that episode, it can be downloaded here.

I know that song too ["Empire"]. But what happened to the lyrics? I'm acquainted with a different version.

The other take is musically a little rougher and much more bleak lyrically. The dark on light makes it for me. Here's the link.

Vickie Rock just back from Sunset Beach and the Harbor House

That Angels tune is on this month's In Memoriam playlist at Any Major Dude (http://www.halfhearteddude.com/), as the lead singer apparently passed away last month.

Vickie: It appears there are two versions of "Empire" -- one from the album (the one you're familiar with) and one that was released as a single. I guess the record company (or someone) wanted a "smoother" version to play on the radio.

I prefer the album version for the arrangement and better words. It rocks a little more. I'd never heard the single before and was kinda shocked. The mood of the lyrics is quite different.