As an Old Friend Observed -- This Guy Mainly Gets It

In the 1970s, US powerpop musicians turned away from jamming and noodling in favour of concise, 60s-inspired songcraft – here are 10 classics 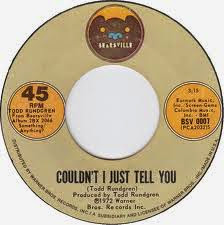 Powerpop, some say, began with Emitt Rhodes’s 1970 debut album or Badfinger’s Magic Christian Music (also 1970), but really those were more like late Beatles works. Powerpop may have drawn on the 60s – in fact, there is a school of thought that has the Beatles, the Beach Boys, the Who and the Small Faces as original powerpoppers – but powerpop is really a 70s invention. It’s about young musicians missing the 60s but taking its sound in new directions. In its insistence on brevity, energy and melody, powerpop was not just an alternative to prog and the hippy troubadours, but a cousin to glam. And like glam, it has a claim to being one of the first postmodern genres.

This is largely a 70s list because powerpop is era-specific. You can re-create it outside the time from which it came, but it becomes something different. So you’ll read arguments in favour of 90s musicians such as the Rooks, Brad Jones and more, but they lack powerpop’s edge, which arises from the tension between the music and the audience’s expectations. They just weren’t meant to make music like this in the early 70s. That created problems for powerpop’s main players, as their commercial, catchy material failed to catch on, resulting in a preponderance of tortured artists and casualties.

Talking of glam, Todd Rundgren could easily feature in a 10 of the best list on glitter rock, just as he could be on a list of piano ballads, blue-eyed soul, proto-electronica, even prog. But he staked his claim to powerpop immortality with this track, which set the whole ball rolling (look out for 1972-73 and 1977-78, because they’re key periods within the overall powerpop time frame). If Something/Anything?, its parent double album, featured multiple styles, then Couldn’t I Just Tell You was a masterclass in compression, from the deceptively sweet acoustic intro and opening salvo – “Keep your head and everything will be cool/ You didn’t have to make me feel like a fool” – to the incandescent 15-second guitar solo, the breathtaking “drop” at 2min 36sec and the climactic eruption of guitars, bass and drums, of which Rundgren played and produced every last note.

You can read the rest at the link; I don't agree with all of his choices -- I would have picked "Surrender" instead of "I Want You to Want Me", for example -- but I think the piece is consistently well argued.
Posted by steve simels at 8:10 AM

Any list of great '70s power pop tunes that doesn't include Blue Ash's "Abracadabra (Have You Seen Her)" or "I Remember a Time" is woefully incomplete. Of course, I may be biased.

"Couldn’t I Just Tell You" is one of my favorite Runt tunes. I agree on Cheap Trick's "Surrender". The Shoes should have had a better vocalist.

We could probably argue about what is missing all day ("Girl Of My Dreams", "Shake Some Action" or even "My Sharona", anybody?)

"Darling" is a pretty interesting choice, actually. Hadn't thought about that song in a while. The Wondermints cover is boss, too.

Don't know about the Twilley choice, though -- it doesn't *pop* to me.

I don't know that locating power pop exclusively in the seventies is fair. I'm hearing it all the time now.
https://www.youtube.com/watch?v=X3wG_Yfvk1U

Couldn't I just Tell You is brilliant. It's the song that permanently disclosed the utter futility of prog for me, forever.

no Clovis Roblaine on this list means the guy has heard very little powerpop IMO.

That seems tendentious at best, Tom.

Matthew or the 70s glam band?

No argument on the Rundgren tune.

Twilley should instead be the obvious I'm On Fire.

I think we all agree on Surrender from the outstanding Heaven Tonight LP. Always liked "Oh Candy" from the debut too, but a bit too gloomy lyrically for the subject at hand. BTW, Robin Zander has a very wonderful Whammy Bar. Me and Sandy tagged teamed him after a gig at the Golden Bear on their first time out to California. Yummmmy.

Plimsouls a Million Miles Away is outside the 1970's, but kicks ass. And how about the Nerves Hanging On the Telephone?

Never really considered Tom Petty power pop, but if so, isn't "When the Time Comes " a better choice?

Badfinger ought to be in there no matter what.

I Wanna Be Your Boyfriend ought to be in there too.

Young and Dumb - Rubber City Rebels. Well, maybe that's not power-poppy enough. Nevertheless, speaking of young and dumb, I'll never forget a Plimsouls/Rubber City Rebels co-bill at the Whisky. Superb show! It was totally out of control! I boinked a Dutch tourist that night right up against the P.A. He was there with his wife! She was giving my guy head under the table, so, what the hell. We loaded an envelope full of the blotter acid and handed it out like candy to the patrons at the concert. More than half of the place was frying. It was sooo much fun. During the Rebels, Sandy went upstairs and taught a Plimsoul what to do with those skinny ties.

Me, Sandy and our guy met this Dutch couple at the Gower Gulch Baskin Robbins earlier that evening. We were already frying on some acid which we had purchased that afternoon - 1000 hits of Mr. Natural. They asked us some stupid touristy questions and we convinced them to change their plans and go with us for adventure in the hills and later to the Whisky. They left their low budget rent-a-car in the parking lot. After scoring a couple of quarts of bourbon at the Thrifty there, we piled into our guy's van, The Sin Bin. I placed four hits of acid in each of their mouths while saying "Here take this, may it serve you well." They swallowed it and washed it down with slugs of bourbon. Then they asked us what it was they had just taken. I told them it was acid. They were so cute and naive! I gave them each a kiss and told them not to worry, that we were gonna have a rrreally good time. Then I gave each of them five bennies and told them it would keep them on an up. I informed them that it was all about irresitible surrender. Abandon beamed from our laughing eyes and smiles. We sure did make some memories. Guaranteed they never forgot.

We all checked into the Sunset Plaza Hotel. Our guy had to do a coke deal out in the Valley so we frolicked nude in the pool till he came back with envelopes full of cash. The innocent Dutch people asked us if everyone in California was this crazy?

Oh-- even though it's way too familiar now, I remember being electrified the first time I heard 'My Sharona' on the radio.

The glam band came first to mind, but your Matthew point is a good one. I liked "Girlfriend" a lot for about 5 plays, seems to me there's some good Quine guitar on there somewhere, but haven't had time for anything else.

The glam band made some great singles. "Little Willy" is probably the most Power Pop, but I like "Barroom Blitz".

As usual Vickie wore me out, and that's ok.

@Blue Ash Fan - Blue Ash's I REMEMBER A TIME represents to me three of the key elements of what later came to be called Power Pop.

One element is displaying credentials, or influences, which in the case of I REMEMBER A TIME -- for me -- consists of The Byrds and Bobby Fuller.

A second element is a sense of longing in the song lyrics or vocal harmonies. In this case, it's both.

The better version of complete heresy

Great harmonies and blend. Not many power pop bands can play this well in a live setting. Very tight.

I know he's actually 80s rather than 70s, but to me Marshall Crenshaw, for tracks such as "Whenever You're On My MInd", "You're My Favourite Waste Of Time", "She Can't Dance" and even "Something's Gonna Happen", absolutely BELONGS in the Power Pop Top Ten. And, despite their own estimable bodies of work, I'd put him before the Shoes or Twilley.

Not a Kiss fan, so have no experience w/album cuts. Gotta say tho, pleasantly surprised by that tune. Nice vocal blend as well. I'll be playing that one again!

As far as I'm concerned, power pop began in 1967 when Pete Townshend coined the term in a New Musical Express article dated May 20, 1967. The NME article was covering the release of The Who's latest single, "Pictures Of Lily", and in it Pete described the song, and the band, by saying: "Power pop is what we play." That was the first time the phrase "power pop" was mentioned in print.

I agree with The Guardian article's author that power pop peaked in the 1970s, but a lot of what I consider to be great power pop doesn't sound like it comes from the '70s at all. What I hear is music that's of its time.

Some power pop that doesn't sound like it's from the '70s (well, not to me anyway):

To me, any of those songs would sound out of place if plumped in with power pop from the '70s.

Sorry to get parochial here, but here's some definitely-non-'70s-sounding-but-definitely-splendid power pop from my country Australia: