From 1970, please enjoy The Move -- featuring the genius that is Roy Wood and some guy named Jeff Lynne (and whatever happened to him?) -- with a live version of their hilariously heavy "Brontosaurus." 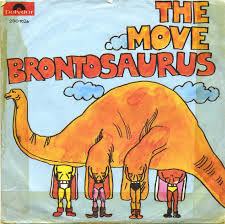 That's nowhere near as good as the recorded version, which is one of the greatest singles of all time, but it's still pretty cool; in fact, I don't think I've ever seen live footage of this incarnation of the band before.

In any case, it's true -- YouTube really IS the most amazing research tool since the Library at Alexandria.
Posted by steve simels at 9:28 AM

Awww, fanx! And you're right–it's not a patch on the studio version, but still great. They'd hit that point in their career where the in-studio tricks couldn't be replicated live.

But I loved the Lynne-era Move..."Split Ends" was my first Move album. Never thought much of anything he did afterwards, though, with the exception of the first ELO album, which may as well have been a Move album. His nadir was his production of the Threetles, when George Martin should've been behind the board. But I suppose that his friendship with Harrison probably got him the gig.

This is the Roy Wood I love!

That Telecaster is totally righteous. I love the sound of a Tele, it's just so much heavier than a Strat...

I do mostly continue to be a Jeff Lynne fan. ELO put out several very good albums, and they rocked it live - Lynne's voice is a classic, Bev Bevan is one of the great rock drummers, and the two cellists got some moves from Pete Townshend. A blast. Lynne's production can be overdone, but he gets good performances out of people - a recent example is the Joe Walsh Analog Man release from 2012; a very solid effort, and way better than it had any right to be.

@cthulhu The Joe Walsh Analog Man album you refer to is one hell of an album, and Analog's closing track, the instrumental INDIA, just smokes.

Mark, totally agree about Analog Man. But, if you bought the digital download from iTunes (the attendant irony is not lost on me), there's a bonus: a James Gang session live-in-the-studio from '71, with special guest on piano and vocals, Little Richard. Yup, the one and only. Tres awesome...

Again we can thank our lucky stars for Beat Club. And the beautiful humming of those Orange Matamps. Lynne's tele is delish. I looove it vibrating and raw. Like thunder. Yabba Dabba Fuckin' Doooo It, Doooo It, Doooo It!

Re: James Gang/Little Richard sidebar: Here it is for free

That Little Richard / James Gang jam is about as potent as the two forgotten 1970's hits of blotter acid which are still taped to the back cover of my copy of the Move's "Split Ends" LP. Neither will bust the gateway to the hedonic highway. A good argument for bonus tracks often looking better on paper than they actually are.

@cthulhu Thanks for the Little Richard-James Gang tip. Pulled down the track while reading the liner notes entry, also on Youtube, by Walsh, on his asking Little Richard about including the then recently found track on Analog Man.

One of the funniest concert openings I ever saw was at a NYC Beacon Theater James Gang reunion show in 2006, where after back-up singers assembled on a riser, Walsh, Peters and Fox all came out from the Beacon's wings to center stage in motorized wheelchairs to a standing and laughing ovation.

Now that I reflect, it didn't even really look that good on paper. The mundane session doesn't highlight either of the artist's strengths.

The James Gang didn't do the wheel chair bit at the 2006 show I saw. But they were great, even if Joe had to back off from some of the high notes vocally. He did have a few vocal clinkers too. He said he had some health issues. The support singers and players were also wonderful. Bill Appleberry and Stacy Michelle in particular.

The show in L.A. was poorly attended. Despite the fact that they were giving tickets away for free on the day of show, the venue wasn't even half full. The opening act was terrible and it was a Wednesday night. Recorded a terrific DAT in front of the board with empty seats all around us. It was pretty much their 1971 set except the encores. I'm really surprised a live album from the tour wasn't released officially. Maybe they're sitting on the tapes. That would excite me much more than that inconsequential Little Richard jam.

Now if you'll excuse me, I got a lunch date with Eddy Vortex. We're gonna make some bronto burgers with the music on.

VR - Anyone else see the Chocolate Watchband with Daryl Hooper last night? Fun show. The supporting bands were fuckin' groovy.

There are a handful of clips of late Move. Here is "California Man".

Saw them do this on Top Of The Pops the week it came out.

it was years before I knew Cheap Trick were throwing in a bit of "Brontosaurus" on their cover of "California Man." Cheating Roy Wood out of extra royalties?

"His nadir was his production"

Wuh...? Jeff Lynne's nadir WAS his production of the Threetles. George Martin SHOULD have been behind the boards.

In his career as musician, you have thousands of nadirs from countless ELO records. To give him his props, though, "Ma-Ma-Ma Belle" was pretty okay. Everything after was way overblown...rock with a capital R at its most pretentious. YMMV.