Tales From the Mystic East (An Occasional Series): Okay, Okay, I Promise This is the Last One!

From 2014, please enjoy Asian Who tribute band Townzen -- get it? (heh) -- as they do to "Won't Get Fooled Again" what their countrymen earlier did to the prisoners in the Bataan Death March. 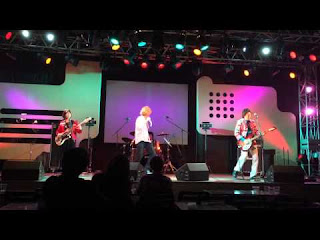 Hey, I think it's kind of cute that the bass player is a lady, but still -- they couldn't find a Japanese guy to stand in for Roger Daltrey?

In any case, on the basis of this performance I think we should call these guys The Huh.
Posted by steve simels at 7:52 AM

Horrifying. Bad, Bad, Bad. It says a lot however, about the current music scene, that there are so many tribute bands.

Here is Shiina Ringo, a Japanese artist who decided she didn't want to be marketed outside of Japan, covering The Beatles in a version of "Yer Blues" I think challenges the original in all the right ways.

I've seen a couple of tribute bands and suffered through "Rain" (free ticket and I figured, what the hell --- hell was right). I get wanting to cover other people's material, but dressing like them, acting like them, playing period instruments --- scary. And never as good as the original.

The reason for all the tribute bands: There's money to be made in them tharn hills. I know many musicians who have had to create/join tribute bands to keep money flowing in where they previously could get by in acts that relied mostly on original tunes.

Also so you weren't around to experience the Stones in '69', well here is as close as you can get in a live setting in 2015 to experience them live. OK I know the Stones are still doing pretty well but what about all the acts we'll never see live again like Zeppelin, Pink Floyd, The Band, Johnny Cash & The Beatles. Heck there are even Woodstock Experience Bands.

Deja Motherbitchin' Mushu Who. Oughta be named The W-Hoover. You just know that's the best white guy they could find who would agree to front their dyno band. He's the icing on the cake. Harpo wigs always do it for me. What a bunch of delusional nitwits.

BBJ: Always loved The Beatles' "Yer Blues" for its tongue in cheek nature. The way it could mock and rock simultaneously. Not quite sure what to make of Shiina Ringo's version. The guitars are kinda cool, but I have a real problem with her enunciation. Maybe that's just me. If John's version is a parody of sorts, then what does that make Shiina's? I'm not sure. Something about Japanese chicks and John Lennon music seems instinctively wrong to me. Dunno why.

VR-
I get what you mean. I dig the track on a purely sonic level. It rocks.

BBJ: Yeah, it blazes. But what's with the Bjorky/spacey shit toward the end?

In 1978, while teaching Communication Arts courses at Queens College of the City University of New York, I was hired by a Long Island promoter of what were then called "cover bands" to videotape his ... ahem ... stable of artists in a Roslyn, Long Island club, which I'm pretty sure was the old U.S. Blues on Roslyn Road, which my Queens friends would refer to as, "You know My Father's Place in Roslyn? It's the OTHER crappy place!" I rented semi-pro hardware (including three industrial cameras with CCUs, two VCRs, a switcher, lights, and an audio console, all on the promoter's dime) and hired sharp Queens College students and a QC tech to staff the production, and we recorded to 3/4" videocassette. The whole thing, including rental and staff, may have cost $1500, but for me, this was fun. The contact came from a QC student, Don Weinstein, who was in a popular Queens and Nassau County band of the time, Kivetsky, and Weinstein worked crew for this shoot.

Each cover band, and oh were there cover bands, did a 20:00 or so set on stage, after which there would be 30:00 or so to set up the next band, and the promoter's intention was to make up a reel of his stable to show prospective clients. In 1974, I got to work with the great Brother Theodore on a TV show I directed for Brooklyn College's TV series on WNYC-TV because Theodore wanted a tape to be able to show prospective clients, so I knew that the promoter was on to something. We saw mock Aerosmith, mock Jethro Tull, mock Michael Jackson (a guy and whose band were REALLY good, and whose endless cover of DON'T STOP 'TIL YOU GET ENOUGH rings inside my head to this day) mock Ten Years After, mock Earth Wind And Fire, and a really scary mock Black Sabbath, with an over-the-top Mock Ozzy, who thought being on "TV" was the big time, and must've been a theater major because his make-up was really good. I recall telling one of the three camera operators to dolly in and "provoke" Ozzy, knowing full well that these were largely Long Island kids and I was working with insured and rented equipment. The camera operator dollied in until mock Ozzy put his face into the camera lens and left what turned out to be a fairly artistic pancake smudge on the camera lens.

My favorite band was the one who didn't show up, and I went around to the production staff and joked that they probably had a paying gig lined up.

This took place over two consecutive late weekday afternoons-into-not-so-late-evenings, and I recall inviting my then-wife, friends and family members to stop by. The original plan was for me to then assemble the segments onto a promo reel, but the promoter objected to my fee -- for what would likely be at least twenty more hours of work -- and I never saw the tapes or the finished product again. At least I have a copy of my Brother Theodore show, parts of which were included in the great 2007 film documentary on Brother Theodore, TO MY GREAT CHAGRIN.

At the time, cover bands that focused on the work of just one artist was a fairly new concept, and I always thought that it was more theater than rock music in the same way that Hal Holbrook performed as Mark Twain and John Astin did Edgar Allan Poe. By the way, Astin's still quite alive, grew up in Baltimore, went to Johns Hopkins University as an undergrad (as did my older daughter), and here he is performing as Poe (at https://www.youtube.com/watch?v=ACUxJ6fq2IY).

I'm still waiting for a Morrissey cover band. One that can handle The Cure, Joy Division and Julian Cope stuff, too. Don't stop 'til you've covered enough.

Wait no longer. Some clips from Mexrrissey, live in London.
Yep. They're a Mexican Morrissey cover band. ¡Y más!

VR-
She's an artist, and this is from an album of covers I've only read about on wikipedia, which says that every song is a different genre. That said, I like her little spacey interlude, think of it as the "Hello Kitty" section, before the onslaught returns.

@Logan -- The Mexrissey-on-Youtube clip you sent me is subtitled, "2000 Londoners can be wrong - but not this time," which answers the longstanding Morrissey question, "How Soon Is Now?"

Personally, I think trumpets should be added to all Smiths songs.

BBJ: It's obvious that Shiina is intelligent, has absorbed a lot of different influences and is an artist. Her stuff goes beyond pastiche. I don't know that much about her, but my first impression is that she's a bit too self-conscious. Her stuff sorta feels pre-planned and mapped out to me, rather than flowing from her naturally and organically. But, then again, haven't heard the lion's share of her stuff. Besides, WTF do I know?

When I was younger I participated in a lot of classical piano recitals. The majority of Japanese contestants had the technique to do the most difficult numbers. But they just didn't have the fire on the fingertips. That's probably not the case with Shiina. She's just coming from a dimension which is kinda foreign to me. Don't think it's the Hello Kitty dimension though:-)

Would love to hear her bark on Hey Bulldog though. I used to take lead vox on that one with a band I was in years ago. A party favorite along with a filthy little self penned, slide guitar number called "Get On the Train."

You know your cover band blows when it's upstaged on youtube by the rear view of some guy in the audience playing air guitar...or air bass...or whatever that was.