[I originally posted this back in 2009; I'm reposting it now because a) the music link has long since expired, and b) I'm sort of under the gun time wise now and I'm too hassled to write something new. Plus, I think it's a pretty cool piece. Thank you for your indulgence. -- S.S.]

And now, from the November 1992 issue of The Magazine Formerly Known as Stereo Review, here's the backstory (charmingly monikered NOISE IN THE ATTIC). 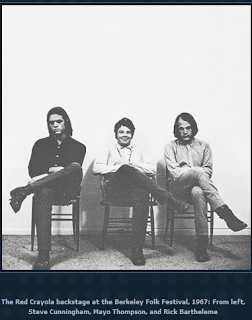 
A couple of brief notes by way of a postscript:

Also, since I wrote the piece, Arable Land has emerged on CD in stereo (despite Barthelme's mono-only claim); improved sonics notwithstanding, I hasten to add that it retains its period charm, and you can order it at Amazon if the song above piqued your curiosity. I really like it, myself.

Finally, some time in the 90s, somebody put out an actual, quite well-recorded, live album of the Crayola's 1967 appearance at the Berkeley Folk Festival, featuring the aforementioned melting block of ice. I had a copy briefly and seem to recall it's actually a double CD; you can order it at Amazonif you have a little disposable income and a fondness for acid-infused Dada-ish art gestures.
Posted by steve simels at 9:07 AM

As I get set to hunker down for the next 24, I must say that while I've read more about Red Crayola than I ever heard their music, your Stereo Review piece is Talk-Of-The-Town New Yorker-like and pretty damn close to qualitative research. It sings.

Horribly recorded (as was most psychedelic rock) but I enjoyed it in a nonjudgemental way.

Of course, it should be pointed out that Frederick Barthelme is also brother to the late, protean, often-imitated-but-never-duplicated Donald Barthelme, whose cut-up, chaotic, ultimately tragicomic fiction seems eerily prescient again.