Just when I thought this year couldn't possibly suck any more than it already has -- comes the news that the Cool Ghoul has shuffled off this mortal coil... 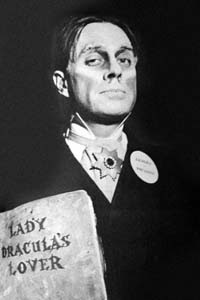 ...and with him a huge chunk of my youth.

Apart from being by far the best of all the local horror movie TV hosts of the late 50s and early 60s, Zack had a long second career as a progressive rock radio deejay in New York City. He also hosted a local NYC knock-off of American Bandstand -- Zacherley's Disc-o-Teen -- in the late 60s, where apart from cracking wise with the kids who came to the show to dance and hang out, he also introduced said teens to some of the hippest music around. I vividly remember hearing "Substitute" by The Who for the first time on his show.

And of course Alex Chilton showed up, too.

He also had a hit with perhaps my favorite novelty rock record of them all.

He lectured once at my old college in the early 70s; I was delighted to discover that he was charming, funny, and a real gent even out of costume.

Damn, this year has just been stone awful.

One of my childhood heroes!!!

That afternoon teen dance show that he had - it was on UHF, if I recall correctly - was where I first heard "Sunshine of Your Love". And it seemed like he played Stevie Winwood singing "Gimme Some Lovin'" every day. Great stuff; great guy.
May I suggest, in the most humble way, that the only way to deal with these losses is be grateful for what we once had rather than mourn for what we have lost?

I too struggled to get Newark UHF Channel 47 (WNJU, as in W New Jersey UHF, and a commercial station that went on the air in the mid-1960s during the FCC's UHF-expansion days) from my folks' apartment in Queens, as did many of my friends. I recall seeing Zach with The New York Rock and Roll Ensemble (wearing tuxes), and a band I liked, on one of his WOR or WPIX shows, among many many other bands. Zach also was a DJ in New York at WNEW-FM and WPLJ-FM, as many of you recall.

I also recall either in the summer of 1971 or 1972 going to a free weekend concert at Central Park with my co-workers at Finetone Audio in Beach Haven, Brooklyn (a company that distributed open reel tapes, 8-tracks, and the then emerging cassette format) to see Exuma opening for (I think) Richie Havens. And whom do I see walking across the CP Lawn with long strides wearing a black (of course) long (of course) Nehru-type sport jacket, but Zach himself. I got up to speak to him and just told him how much I enjoyed his fill-in work at either WNEW-FM or WPLJ, and he was polite, friendly and possessed a killer (and real) speaking voice.

I then went back to my co-workers to tell them that I had spotted Zacherley walking across the meadow, and had actually spoken to him. "Who?" was the response.

Sure, Zach was a character on TV and radio. But he also appeared to be a decent person, which says a lot about him. Rest in peace, Z.

Pretty much the same reflections of the TV experience in New Haven,CT.
If I was lucky, rabbit ears with 2' of tinfoil might yield a signal for 15 minutes.

Zachs most constant presence was through a carefully tuned am radio. ;-)

I could watch that show all day, and not just because of the hot mini-skirted girls.

Stevie, Donald Fagen posted a column at Slate about horror flicks. He mention Zacherley in it.