So some friends threw a little early birthday bash for me on Friday, and I got to meet Jay Jay French, best known as the long-time guitarist for Twisted Sister. A great, super funny guy (and one who's led the kind of interesting life, not even counting the music, that I can barely imagine).

In any case, as you can see, a splendid time was had by all. 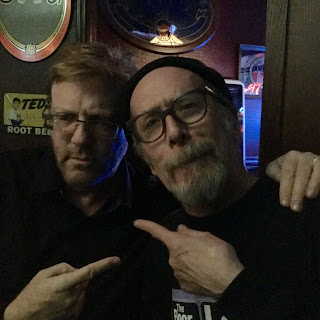 After I got home I was, unsurprisingly, moved to watch the classic TS video for "We're Not Gonna Take It"...

...and imagine my surprise when I learned -- on the very next day -- that the kid in the video actually DID get to...well, you'll see.

From the press release:

Dayz lead singer Dax Callner is also known for his memorable war cry “I wanna rock!” from a then wholesome, yet mischievous-looking, 12-year-old boy to his father figure in the iconic 80s rock video “We’re Not Gonna Take It” from 80s rock legends Twisted Sister. Now, decades later, Dax -- that defiant kid that helped define a generation’s youthful rebellion -- is back and still ready to rock. This time around, he’s behind the microphone.

In any case, you can find out more about The Dayz -- and order their new EP -- over at their website HERE.
Posted by steve simels at 8:12 AM