[I first posted this piece back in 2009 -- when this blog and I were young -- but I'm reposting it now for reasons that will be obvious when you get down to the last graf. Enjoy! -- S.S.]

Sometime in late '73 or early '74, a large and mysterious package addressed to me arrived at the offices of the Magazine Formerly Known as Stereo Review, with a label that said "Trademark of Quality Records," and a postmark from San Francisco, but no return address. When I opened it, I found, to my surprise, a stack of 30 or 40 LP albums. All bootlegs. Each more amazing than the next, including these two -- 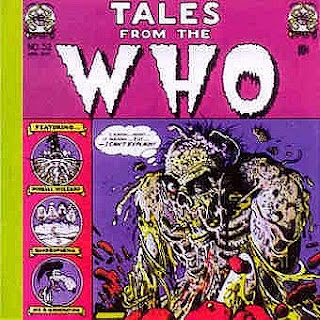 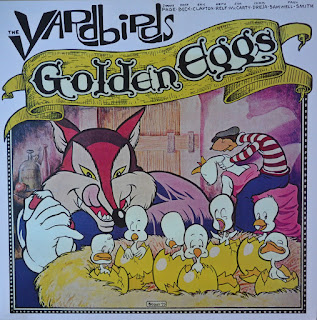 -- which featured cover illos by a (then unknown to me) comic book artist named William Stout.

And when I say amazing, I'm not kidding; there was Dylan stuff up the wazoo, including the Albert Hall concert, another Yardbirds package (on colored vinyl!) featuring liner notes where the bootleggers interviewed singer Keith Relf about each track in detail, Pete Townshend's home demos, tons of Stones, including the '72 Garden show in glorious off-the-board stereo and a seven-inch EP of live at the BBC r&b covers -- 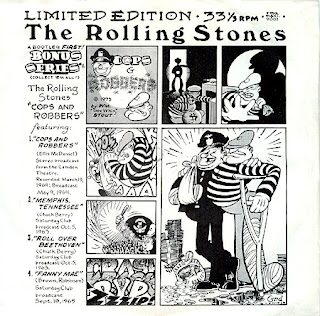 In other words, just ridiculously great and in some cases -- a '66 acoustic Dylan set from Australia in perfect sound -- life changing stuff. 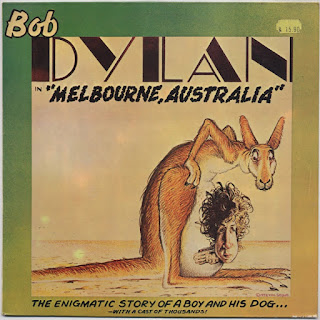 And a note: "Dear Steve -- we've been reading you and we think you might like some of this. Enjoy!"

I never found out who had sent me the package, but over the years I followed Stout's career with interest, and was perhaps inordinately pleased when he moved over into movie work; I remember in particular how tickled I was when I saw he'd done production art on the Invaders From Mars remake and the Masters of the Universe flick. (He has slightly tonier stuff to his credit, BTW; more recently he worked on Pan's Labyrinth, and cooler than that it does not get).

Anyway, the other day, while researching an obscure David Carradine movie -- The Warrior and the Sorceress -- I discovered that Stout had a writing credit on it, so with the intention of picking his brain about it and some other stuff (figuring this was as good an excuse as any to finally get in touch with him) I gave him a holler.

Turns out he's a thoroughly charming guy with a lot of (as you might imagine) interesting stories. But just before I hung up I told him about the package that had arrived at SR all those years ago, and how much I've always wanted to thank the people that sent it, whoever they were.

He laughed, and then finally said "I'll tell them."

I think there was an implied wink, but I'll probably never know.

Meanwhile, when you get a minute, go over to Bill's OFFICIAL WEB SITE, which has lots of other cool art and reminiscences, and definitely behooves beholding. You'll thank me.

UPDATE: So Tuesday, after concluding my appearance on friend of PowerPop Capt. Al's intertube radio show, the good Captain presented me with this piece of original William Stout art work. 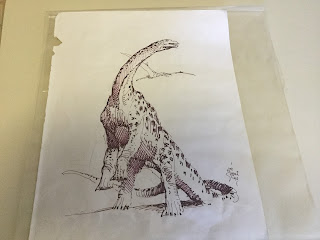 You could have knocked me over with a feather. Needless to say, I'm having it framed toot sweet, and it will be occupying a prized place on the wall of the home of a certain Shady Dame of my acquaintance as soon as possible.

In the meantime -- have a great weekend, everybody!!!

Stout is an amazingly talented guy, learned a lot about him in Clinton Heylin's book, "Bootleg."

I bought a lot of those records you talk about in various record stores over the years. And yes, some of them were lifechanging - I agree with you about the Dylan Australia album - at the time (the 1970s) his 1966 tour was already legendary, and any glimpse into it was like peeling back the curtain on a fabled golden age. Though I didn't own it at the time, "Who Zoo" was another revelation -- rarities, b-sides and forgotten singles like Under My Thumb, Relay, Join Together -- for a long time, it was one of favorite Who albums.

Stout's art added class & wit to these black market items, which had started out in 1969 as plain white cardboard covered discs literally sold 'under the counter.'

Dang! I thought this was gonna be *complete* VR bait...! (I doubt that she and her girlfriend ever did him, though, so maybe not.)

A friend of mine used to go to art school with Stout (she never did him, to the best of my knowledge), but probably has a few art school drawings of his and is destitute. She's a hoarder though, so probably wouldn't know where to find them.

Lastly, the only artwork I ever did for Rhino (besides some Photoshoppery for the wonderful "One Kiss Can Lead To Another–Girl Group Sounds Lost And Found") was a pisstake on Stout's famous logo for Rhino. The original soundtrack from the film version of "Little Shop Of Horrors", produced by "Richard" (featured prominently in the book Gummo mentions, "Bootleg", since he was one of the major bootleggers in the 80s). I drew a dead Rhino head growing out of a Maxwell House can, and signed it "with apologies to Wm. Stout". I never did him though, either.

Bill's not that kind of guy. But he loves to scuba. Everything's zen in the deep. Haven't seen him since he burned that candle. A kind soul.

That is one amazing story, Mr. S. To have a longstanding and personal metaphysical question answered in one's lifetime is one sweet gift. Take the rest of the weekend off.

The Smithereens used him for an album cover - check it out: http://www.slicingupeyeballs.com/wp-content/uploads/2009/05/1069473.jpg

Damn, I visited the website and store...I would have loved to buy a print of the Rolling Stones album cover.
Although he evolved in style,You can see the Crumb influence in his earmy work.